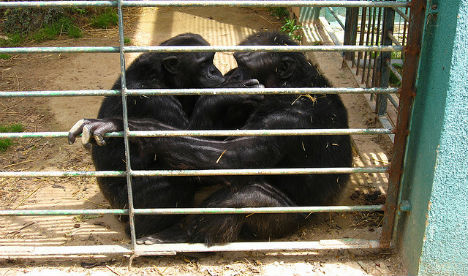 Adam was found drowned in a reservoir at a water treatment park near to the zoo on Thursday morning, four days after his mate Eve was shot dead by police.

The primate couple – a male and a female called Adán y Eva (Adam and Eve) – ran off together after breaking down the bars of their cage at Sa Coma safari park on Monday afternoon.

The 70kg chimps went on a rampage through the zoo, breaking windows and attacking other animals forcing tourists to take refuge in their own cars or inside the zoo’s restaurant.

Authorities launched a search, scrambling a helicopter to join a unit from the Civil Guard’s specialist animal unit Seprona as well as teams from the zoo and the local police.

But the chimps’ bid for freedom took a tragic turn when Eva was shot dead by a member of the zoo’s staff.

Her mate evaded capture and was still on the loose despite intensive search operation by local police and Seprona. His body was finally discovered early Thursday morning, floating face down in the pool.

Animal rights groups on the Balaeric Islands were quick to criticize both the conditions that the apes had been kept in and the way they were treated after the escape.  They have called for an investigation into the escaped chimpanzees.

Questions were asked over why Eve had been shot dead and not simply captured using a tranquilizing dart after her escape.

Animanaturalis in Mallorca complained of the "alarming conditions" that the rest of the animals are kept in at the safari park.

The charity also said that other minimum requirements including normal safety measures to protect the public were not being met by the zoo.

The primate enclosure at Sa Coma was of particular concern said a spokesman from Animanaturalis, who said no effort was made to provide a natural environment for the chimps.

"This can cause a lot of stress in primates and not surprisingly lead to cases, like those of Adam and Eve, of chimpanzees trying to escape their cages and adopt aggressive attitudes.