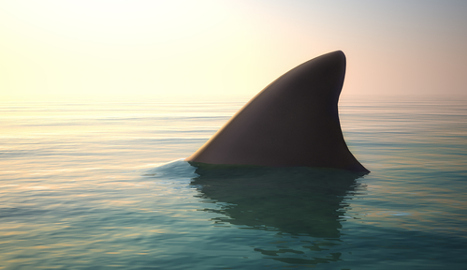 Photo of a shark: Shutterstock

Tourists feared that the beaches were being stalked by a great white after a fish bearing a more than a passing resemblance to Jaws was snapped in the water at a viewing point between Magaluf and Palmanova.

But The Local has been told by experts that there is no doubt whatsoever that the mysterious fish sighted in shallow water off Palmanova last week was not a great white shark.

Claudio Barriá, a shark expert at Barcelona’s Institute of Marine Sciences of Barcelona (ICM), told The Local: "I wish I could tell you that was a great white or even a shark of any species. It would be terribly exciting to have one swimming in Mallorcan waters."

"But unfortunately, no. I can say it is very unlikely to be a great white shark. In fact it is most likely to be a harmless tuna," he said.

After examining the photograph the marine biologist explained that it may on first glance appear to be the shape of a shark but on closer inspection it was not.

"Thanks to the effects of refracted light, some shadows on the seabed, and the fact that the photo was taken looking down on the fish, I can see why you might think it is a shark," Barriá told The Local.

"If a shark was photographed from that angle it simply wouldn’t look like that," he said.

He added that tuna are usually seen in shoals and can often be mistaken for sharks at first glance when seen swimming alone. But he said because of the poor quality of the photograph it was very difficult to identify what species it was.

In a photograph taken from another angle the fish did appear much more like a tuna, he said.

"Unfortunately, although great whites were once frequent visitors to the western Mediterranean including waters around the Balearics, they haven’t been seen there for more than 20 years," he explained.

"The species is very susceptible to changes in environmental changes such as water temperature and over fishing and so isn’t found there anymore."

Locals had been swift to dismiss the sighting, which quickly spread across social networking sites.

"I think it is most definitely a hoax," said Chris Seheroenzeel, the manager of Big Blue Diving in Palmanova just yards away from where the supposed Great White was spotted.

"I have done between 900 and 1000 dives in these waters and never seen a shark of any kind in these waters," he told The Local from the diving school.

"Sharks are very shy animals and they are constantly hunting for food and there is nothing that would interest them in the shallow waters around Palmanova,"he explained.

"From the photo I have seen on the internet the shark would have to be about two meters in length – which is quite a size –  swimming in waters that are three meters deep."

The last shark attack recorded in waters off Spain occurred in 1993 when a swimmer off a beach in Valencia lost several toes after being bitten by a two-meter long slender shark, of a species he was unable to identify.

The most common marine danger encountered by holidaymakers when swimming in Spanish Mediterranean waters are jellyfish, which plague coastlines during the summer months.