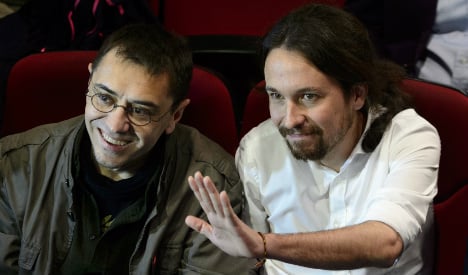 The surprise resignation on Thursday of one of the party's founders, 52-year-old political science professor Juan Carlos Monedero, threw the spotlight on party divisions ahead of regional and local elections on May 24, and a general election later in the year.

Podemos's first crisis since its 2014 foundation comes as centre-right upstart Ciudadanos (Citizens) is stealing the confidence of voters who want to end the dominance of Spain's two main parties, but who fear the hard left's radical tone.

"There are tensions at the heart of Podemos," Monedero told an online radio station hours before he announced his surprise resignation.

Monedero, a former advisor to late Venezuelan president Hugo Chavez, expressed disappointment over the direction of the party, which was born out of the Indignant protest movement that occupied squares across Spain in 2011 demanding an end to austerity.

Podemos, which is close to Greece's Syriza, has now agreed to meet with bankers and soften some of its positions as it tries to broaden its appeal by moving to the centre.

But the radical Monedero, who has been referred to as the "political brain" of the party, believes it would be a mistake for Podemos to change.

There are "people who are more moderate, and people who want to stick to our origins", he said.

Critics of Podemos, whose name translates as "We Can", have accused the party of being financed by Venezuela through Monedero and his advisory work, a charge the party denies.

A former member of Spain's main opposition Socialists, Monedero has been under fire since he confirmed in January he worked as an advisor to left-wing Latin American governments and only recently paid the taxes he owed for the job.

While Podemos's surge appeared unstoppable earlier this year, a new survey published last Monday showed the party bringing up the rear among the four main contenders.

A survey published Monday by the Spain-based MyWord Institute showed Podemos trailing behind the two main parties and Ciudadanos, a young challenger that vows to fight corruption but which has staked out a more moderate position.

"Podemos is seen (by voters) as being very left-wing. And suddenly, a party which is more centrist has emerged," Barreiro said, referring to Ciudadanos, which has attracted voters thirsty for change from both the left and the right.

"For voters in the centre, (Ciudadanos) is closer to them. It is also new, and it (promises to) fight corruption," she added.

If it wants to fare better in the general election, Podemos must find "a great idea to renew itself, or else it will be difficult", said Fernando Vallespin, political scientist at Madrid's Complutense University, who knows the party founders personally.

Podemos, which has made ending austerity and corruption a priority in a country where one in four workers is out of work, accuses opponents of using its Venezuela ties to stoke fear among voters.

Podemos has also shown other signs of shifting.

In a recent editorial, the pony-tailed Podemos leader Iglesias — who often cites Karl Marx and other Communist thinkers — hailed the memory of Olof Palme, the Swedish Social Democratic prime minister who was gunned down in Stockholm in 1986.

A former member of the youth wing of Spain's Communist Party, Iglesias has been accused of compromising on his ideals in order to advance his political goals.

"It's politics… There are contradictions… Women who work for Hispan must cover themselves with a veil. Do I like that? No," he said.