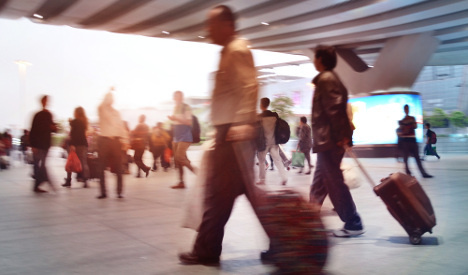 Photo of people with suitcases: Shutterstock

The Chinese-run gang used houses in the Barcelona area as stopover bases, hiding the migrants there while they waited to be trafficked on to Britain, Ireland, Canada and the United States.

They arranged flights for the migrants via Chinese travel agencies in Spain and provided them with fake passports, police said in a statement.

"They charged on average €20,000 for each person trafficked and made serious threats against their families if they did not pay."

The police said the suspected leaders of the gang were among those arrested. One of the accused travelled around the world using at least 14 different identities to avoid suspicion.

Officers caught more than 70 migrants with fake passports as they tried to take flights from Spanish airports bound for the various trafficking destinations.

Police said the case shed light on relations between various branches of the Chinese mafia in Spain.

"The investigations revealed links between the criminal organisation that has been broken up and other illegal Chinese organisations based in Spain involved in extortion and score-settling."

More than 191,000 Chinese nationals are registered as living in Spain, according to the National Statistics Institute. Many of them run shops and wholesale businesses.