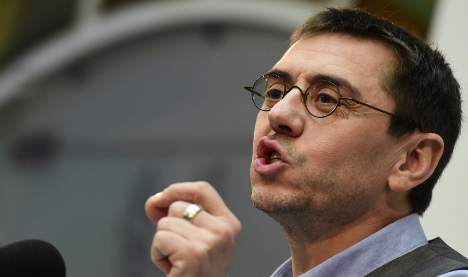 "I have tendered my resignation from the leadership to my friend Pablo," he wrote on his Twitter feed, referring to pony-tailed Podemos leader Pablo Iglesias.

"Podemos should stop looking into mirrors that are not its own," Monedero added.

His surprise departure comes just as the hard-left party — an ally of Greece's ruling Syriza — has been slipping from the top spot in recent surveys of voter intentions ahead of a general election expected around November.

"The political brain of Podemos has left," Ramon Lobo, author of a recent book on Monedero, told AFP.

Since bursting onto the political scene a year ago, Podemos has ridden a wave of popularity and is hoping to end the dominance in Spanish politics of the opposition Socialists and the governing conservative Popular Party.

But the radical party, whose name translates as "We Can", is facing a bounce-back in the polls from the traditional heavyweights as well as competition from another young challenger, the centrist Ciudadanos (Citizens) party which has staked out a more moderate position.

"There are tensions at the heart of Podemos," Monedero told Cable radio on Thursday, hinting at a difference in opinion over where the party was headed.

There are "people who are more moderate, and people who want to stick to our origins," he said.

A poll published by Cadena Ser radio Monday gave Podemos 17.9 percent of the vote if elections were to be held now. Prime Minister Mariano Rajoy's Popular Party took the top spot with 22 percent, followed by the Socialists at 21 percent and Ciudadanos at 19.4 percent.