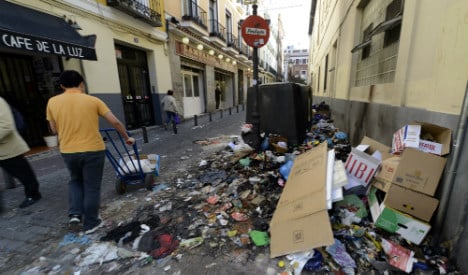 Rubbish piled up during a strike in November 2013. Photo: Gerard Julien / AFP

The survey carried out by Spain’s Consumers Organization (OCU) examined the public spending on street cleaning services as well as public perception to rank the cities based on how clean they were.

The five things that would improve Madrid for tourists

Those in the north of Spain fared better than those in the south, with seven out of the top ten ranked as cleanest being in Asturias, Galicia, the Basque Country, La Rioja and Navarra.

Those in the bottom out of 60 cities analyzed included Madrid, Alicante, Valencia and four provincial capitals in Andalusia.

People were asked to rate their City councils based on the cleaning services they provided but Madrid, which spends the most per capita – at 78 euros per head per annum – performed the worst while Oviedo – which spends just 52 euros a year on each of its residents – came out tops.

The study, which was last carried out four years ago, showed the extent to which austerity measures had seen municipal cleaning budgets slashed.

“Those cities that plummeted down the cleanliness scale since 2011 have been the cities suffering the biggest budget cuts; Cuenca, Valencia and Zaragoza,” read the conclusion of the OCU report.

In November 2013 Madrid turned into a "stink city" when its street refuse collectors went on strike.