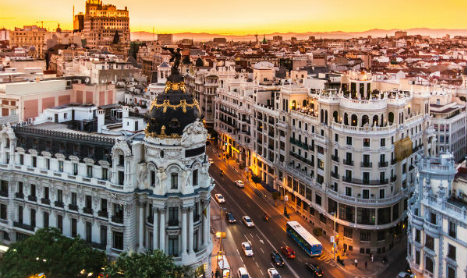 Aguirre, the iron lady of Spanish politics, said this week she wanted to "clean up the city" tackling the problem of homeless people sleeping rough, protests and graffiti, all issues she claimed were putting tourists off the Spanish capital.

The mayoral candidate for the conservative Popular Party said that in neighbourhoods in the city centre, such as Las Letras or the Plaza Mayor "the biggest complaint" is that "there are a number of people, mostly of foreign origin, part of organizations and mafias which are organized not only to survive but live well based on these issues that we need to look into and eradicate." "We have social services to house people that need it," she added on Monday after meeting with the president of the government of the Balearic islands José Ramón Bauzá Díaz, along with various tourism industry representatives in Madrid.

She also warned of the "tremendous proliferation" of graffiti around the city, turning some neighbourhoods into "ghettos".

So The Local hit the streets of Madrid to ask tourists if they were aware of the issues blighting Spains capital and whether it had indeed ruined their stay.

"We’ve noticed people sleeping rough," said Connie and Joe from Dublin, "but it hasn’t put us off the city."

It was a sentiment shared by many of the tourists we spoke to, on a sunny Tuesday afternoon outside Madrid’s Prado museum.

Peter and Claire, from Boston, pointed out that there were more homeless people in their home city in the United States than in Madrid and were also concerned with how Aguirre planned to “get rid of” all of Madrid’s homeless.

Another of Aguirre’s gripes is gangs of young pickpockets that she says roam the city. For Connie, from Dublin, who was visiting Madrid for a week with her husband Joe, there was a comforting police presence in the city, "I’ve never seen so many police, we could do with a few more in Dublin!" she told The Local.

Everyone we spoke to had good things to say about the city, according to Barney from Austria, Madrid is hard to beat.

"I really love this city, it’s one of the best I’ve ever visited," he told The Local.

The Local finds out what changes would improve Madrid for tourists:

"There are lovely little outdoor restaurants but the traffic noise is so loud," says Peter from Boston. Madrid’s traffic is a huge cause for concern among tourists and locals alike, with the city gaining an "F" grade for the cleanliness of its air in a recent study. "We found it hard to find a good map this morning," John, from South Korea, told The Local. For a city that is so easy to walk, making maps more readily available to tourists would surely help them navigate Madrid’s many interesting barrios. Something tourists are increasingly noticing are the empty shops and pulled-down shutters an outward sign of Spain’s struggles during the last seven years of economic recession. Madrid could put more effort into encouraging new businesses to fill empty shops. While Madrid is making an effort to become more bike-friendly, launching an electric city bike scheme as well as putting bike lanes on select main thoroughfares such as Calle Mayor, it could definitely do more to encourage residents and tourists to cycle. Adding more bike lanes is an obvious start, as many people feel like they’re taking their life in their hands attempting to cycle in amongst Madrid’s unpredictable traffic.