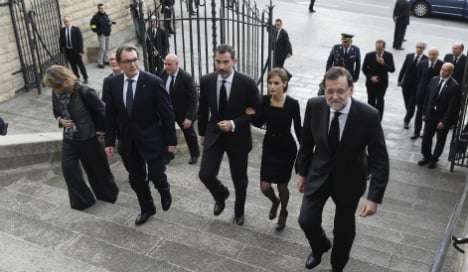 The March 24th budget flight took off from Barcelona but never made it to its Duesseldorf destination. It crashed in the French Alps, killing everyone on board, including 72 Germans and 50 Spaniards.

The ceremony was held in several languages. Students from a college near Barcelona, which had hosted 16 German teenagers before their tragic deaths, held a solemn march.

They lit up 150 candles, one for each victim, placing them at the altar of the impressive cathedral, which was designed by Catalan modernist architect Antonio Gaudi.

Families of the 50 Spanish victims accompanied dozens of the Germans' relatives at the ceremony.

Co-pilot Andreas Lubitz, who had been diagnosed as suicidal in the past, is believed to have deliberately flown the plane into a mountainside after locking the pilot out of the cockpit.