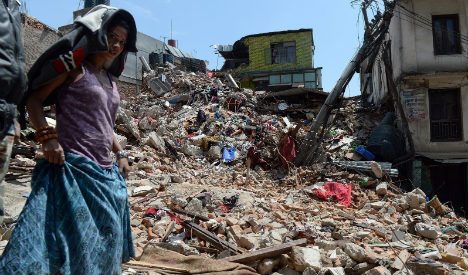 A Nepali woman pictured among the devastation of Kathmandu after Saturday's earthquake. Photo: Prakash Singh/AFP

Spain's foreign ministry has said that of the 449 Spaniards thought to have been in Nepal at the time the earthquake struck, 332 have been found while 117 remain unaccounted for, among them tourists and residents. Only one Spaniard has been reported injured so far.

"We have no notification of any deaths," Spanish foreign minister, José García Margallo told Spanish radio broadcaster, Cadena Ser on Monday morning, emphasizing that the number of missing could fall rapidly as there might be "certain people who have already left the country" without notifying the Spanish embassy.

At least 3,617 people are known to have died in the 7.8-magnitude earthquake which hit Nepal on Saturday, April 25th, while more than 6,500 have been injured, many forced to spend the night outdoors after their homes were destroyed.

Some of Kathmandu’s most historic sites have been flattened in the quake, among them the 19th century Dharahara Tower and many buildings in the capital’s historic Durbar square.

The Spanish air force is set to make two flights to Kathmandu from New Delhi on Monday to evacuate Spaniards currently trapped in the Nepali capital.

Spanish Foreign Minister Margallo flew in the same plane, an Airbus 310, to the Indian capital, New Delhi, on Sunday for a two day official visit.

Each flight can carry 70 passengers from Kathmandu to New Delhi, with 140 expected to be evacuated on Monday’s two flights. The air force is ready to embark on a third flight on Tuesday, according to foreign ministry sources, if there is sufficient need.

According to diplomatic sources quoted by Spanish news agency EFE, the priority of Spain’s foreign ministry at the moment is "to evacuate all the Spanish people" from Nepal.

Spain has also pledged a team from its national Military Emergency Unit as well as one from Madrid to aid in the rescue effort.

Spain’s development agency, the AECID, has sent a Hercules to help charitable organizations, such as Oxfam, who are currently providing aid to the country.

Spain’s foreign ministry has set up an emergency helpline in the wake of the disaster for anyone affected by the earthquake or searching for loved ones who might be caught up in the disaster.

Hundreds of Europeans have been caught up in the disaster, many of them holidaying in the nation, whose main industry is tourism.