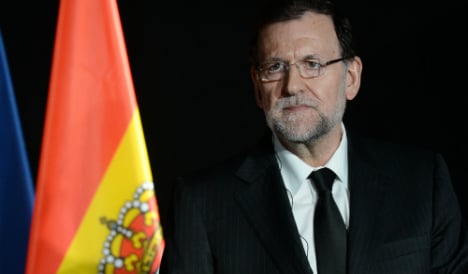 “At the moment, I see as enemies of Spain's recovery the political instability — it's a possible enemy of the recovery — and then Greece,” Rajoy told a press conference in Madrid.

Rajoy, whose conservatives faces a challenge in local elections in May from the anti-austerity Podemos party, an ally of Greece's ruling Syriza, accused the government in Athens of taking the country down the wrong path.

“Things weren't going badly (in Greece). Then the government changed. The new government decided to say that it accepted none of what the European Commission, the European Central Bank and the International Monetary Fund said.

“But these three are its creditors and if it doesn't accept (their terms) it risks having its funding cut,” Rajoy added.

The key, he said, was to have “growth and employment. And for that you have to do like everyone else: fiscal consolidation, structural reforms, etc.”

Linking the situation in Greece with that in Spain, which was also battered by the eurozone debt crisis and which is gearing up for a general election expected at the end of the year, he said: “Spain is the first to want things to go well for Greece.”

His remarks came as Greece prepared to resume negotiations Monday on a deal needed to unlock 7.2 billion euros ($7.8 billion) in remaining EU-International Monetary Fund bailout money, according to a Greek government source.

Disillusioned with the ruling conservatives and the opposition Socialists, many voters have been wooed by Podemos and Ciudadanos, another new party that campaigns against corruption but takes a more liberal economic line.

While Podemos's surge appeared unstoppable earlier this year, a new survey published Monday showed the party bringing up the rear among the four main contenders.

The survey by the Spain-based MyWord Institute showed Rajoy's PP still on top with 22 percent of voting intentions, ahead of the Socialists with 21 percent, Ciudadanos with 19.4 percent and Podemos trailing with 17.9 percent.

The bank posted an annual net profit of €9.6 billion, up 18 percent from 2021 and higher than forecast by analysts polled by financial data firm FactSet.

“2022 was another strong year for Santander as we made further progress in growing our customer base profitably, while maintaining a rock-solid balancesheet,” Banco Santander head Ana Botin said.

Central banks have hiked interest rates worldwide in an effort to tamerunaway inflation, which jumped after economies emerged from Covidrestrictions, and surged higher still after Russia invaded Ukraine last year.

Botin said central banks and governments are expected to continue to focuson bringing down inflation this year.

“Our team has proven experience in navigating these conditions successfullyand we expect revenue growth will continue to offset cost inflation pressuresand the anticipated increase in cost of risk,” she said.

The bank, which has a strong presence in Europe and Latin America, added seven million new clients last year, bringing its worldwide total to 160 million.

Its net interest income, the equivalent of its revenue, rose 16 percent to reach €38.6 billion, slightly higher than forecast by FactSet.

The bank confirmed that shareholders would receive a payout of around 40 percent of the group’s underlying profit, divided equally between cashdividends and share buybacks.

Spain’s left-wing government plans to impose a temporary windfall tax on big banks in 2023 and 2024 to finance measures aimed at helping households cope with higher prices.

The measure is expected to add €1.5 billion to the state budget this year and a similar amount in 2024.