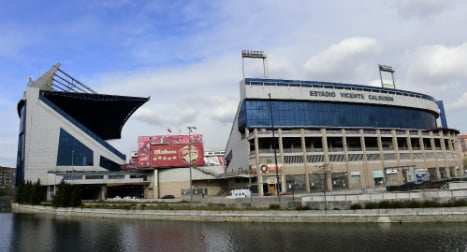 The VIcente Calderon stadium on the banks of the river in Madrid. Photo: Javier Soriano / AFP

In a judgement passed on April 13 and published on Friday, the court in Madrid scrapped a plan passed by the city council in 2009 that would have allowed the construction of tower blocks on the site of the ground in the south of the Spanish capital.

The court explained that they had taken their decision because the plans did not conform with laws preventing the construction of buildings which rose higher than three stories plus attic space.

According to the daily El Pais, the plans were to build towers rising to 36 stories.

The judgement can still be appealed.

The initial plans were to replace the Vicente Calderon with green space and build apartments on the adjacent site of a former factory owned by the brewery Mahou.

El Pais report that the operation would have helped Atletico fund building work at their planned new ground, La Peineta, in the east of Madrid, where construction work is set to cost 195 million euros (£139.7m, $212m).

Senales de Humo (Smoke Signals), a supporters association opposed to the plans to demolish the Calderon, took the case to court.

Atletico, meanwhile, released a statement declaring that the court's decision will not have any impact on their move to La Peineta, the athletics stadium which is being expanded to hold 70,000.

"Work on the new stadium is scheduled to be completed in the spring of 2017 and this judgement will not change that," the club said.

Atletico, in whom Chinese billionaire Wang Jianlin has invested around 47 million euros, claim that the new stadium will "improve their image" and help them "move into the modern era".

The ground was initially supposed to be ready this year. It was earmarked to be used as the Olympic Stadium if a Madrid bid for the 2020 Games had been successful, but the Spanish capital lost out to Tokyo.