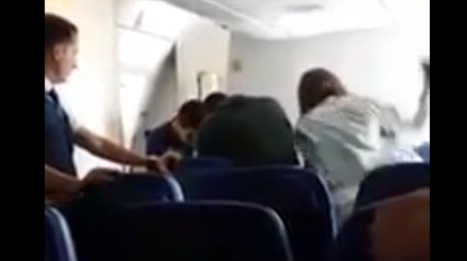 Dawlin Sánchez, who was sent from Madrid airport on an commercial plane after 14 years living in Spain, can be heard shouting over and over: "Let me go! You’re going too far! You’re hurting my hand!"

He is held by two officers while a woman in plain clothes repeatedly and viciously punches him, undisturbed by his pleas to stop, until she notices that she is being filmed.

The footage was taken by a passenger on the Air Europa plane on April 11th, and was passed to the Spanish human rights group Stop Deportation, who said such incidents were far from uncommon.

In an interview with Spanish newspaper El Mundo, Sánchez admitted that although he was handcuffed at the time he still attempted to resist getting on the plane.

“I resisted a little, I was moving around and trying to explain to them that I couldn’t go back to the Dominican Republic. I have been living in Spain for the past 14 years, my entire family is there,” he said.

But he insists that he had not lashed out at police and that the subsequent beating was beyond all reasonable justification.

"At no time did I hit out at the police. How could I have hurt them seeing as I was handcuffed?” he said. “The woman hit me on the head and chest. One man was holding my neck and the other held my arm.”

He added that as well as the beating on the plane he had been beaten while in the bathroom at the airport. “I was hit too many times. I was treated like a dog.”

He also said it was inhumane that he was kept for nine hours with his hands cuffed behind his back.

Spanish authorities have now launched an investigation to determine whether the police used excessive force and will make a confidential report to Dominican consular officials who have asked for answers regarding the case.