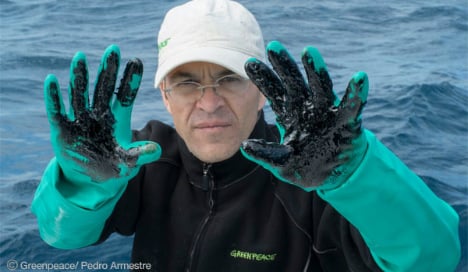 Greenpeace warned on Friday that sea creatures, including the first dolphins, have been spotted covered in oil.

Traces of shipping fuel have already been scraped off protected tourist beaches on the island of Gran Canaria. The beaches of Veneguera, Tasarte and Tourito have been affected, according to local reports.

The environmental group warned that the situation was likely to worsen in the coming hours and days and have urged the government to use all measures to try and plug it.

"Oil is washing up on the beaches, it is now essential to activate all the technical and human resources to prevent more serious impacts. The ministry of Environment needs to get involved alongside the Ministry of Development  "said Greenpeace spokesman Julio Barea from the affected area.

The vessel is thought to be leaking around 5-10 litres of fuel into the sea by the hour.

The Oleg Neydenov was carrying nearly 1,500 tonnes of fuel oil when it sank near the Canary Islands on April 15.

Bad weather since has prevented the authorities from plugging the leak and removing fuel that seeped out of the trawler.

Spanish authorities have been widely criticised for towing the trawler out to sea as a precaution after it caught fire on April 11 when the ship was moored at Las Palmas port on Gran Canaria, prompting the 72 crew to be evacuated.

Environmentalists say the area where the ship sunk has deep-sea coral and a significant population of dolphins and turtles and that the spill already stetches more than 100km.

Greenpeace released aerial footage of the area which shows visible signs of the oil leak.