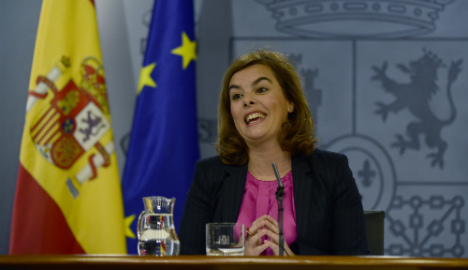 Thousands of people have flocked to the southern Spanish city of Seville this week for its April Fair, among them Spanish politician Soraya Sáenz de Santamaría.

Seemingly able to forget the tribulations that have plagued the government this week, including difficult questions over a tax amnesty, Spain's deputy leader was able to let her hair down – and put on her dancing shoes.

GALLERY All the fun of the fair: Snapshots from Seville

She visited one of the fair’s casetas, or private marquees, where she showed off her fancy footwork by dancing some traditional Sevillanas, a kind of folk dance typical of Seville.

While she did not don the typical flamenco dress, preferring her regular look of a conservative suit, she slinked across the dance floor, beckoning to her political colleagues to join her.

What she lacked in finessed footwork she certainly made up for in enthusiasm.

Sáenz de Santamaría was in Seville with several Popular Party colleagues to celebrate the Fería de Abril, which dates back to 1847 when it was originally a livestock fair.

It has become a week-long celebration with flamenco dancing, bullfighting and horse-drawn carriage rides through the streets.

On Friday she was back in her usual role at Moncloa delivering the weekly post-cabinet press conference.