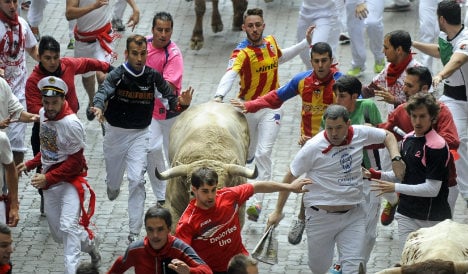 Participants in Pamplona's famous running of the bulls. Photo: AFP.

Spain’s state television channel has had to shelve plans to stage a reality show which would have seen celebrities pitted against each other as they ran through the streets of Pamplona being chased by a pack of half-tonne fighting bulls.

News of the proposed series so enraged the Pamplona Peñas – the bullfighting supporters clubs – as well as the authorities in the Navarran capital that the idea has been quietly dropped.

Enrique Maya, the mayor of Pamplona, had rejected the idea out of hand claiming it would "damage" the image of the world famous fiesta.

"I am completely opposed to such a programme, and if it goes ahead it will be with zero co-operation from the City Hall," he said, according to a report in the regional newspaper, Diario de Navarra.

He said that city hall was "working hard to improve the image of the encierro, to give it more artistic and cultural value" and that a reality show was "not the best way" of doing so.

Referring to Spanish reality show staple Kiko Rivera, the mayor said: "I do not even want to imagine what it would be like to have characters such as Paquirrín in such a show about the running of the bulls."

"Turning SanFermines into something like Big Brother would be terrible," Maya told FormulaTV.com

Francisco José Rivera Pantoja, aka Kiko Rivera, but commonly refered to as Paquirrín was one of the celebrities tentatively mooted to take part.

But on Wednesday, following the furore, RTVE announced that it had shelved plans for the reality show.

John Hemingway, the grandson of the author who propelled the San Fermin fiesta to worldwide fame after writing it about it in his 1926 novel The Sun Also Rises, is a regular at the July fiesta.

He too felt that a reality show was unlikely to capture the true spirit of the fiesta.

"I think that anyone has the right to film the encierro," he told The Local.  "But I do hope that those who are running in it take it seriously because people have been killed running with the bulls."

Alexander Fiske-Harrison, co-author  and editor of "Fiesta: How to survive the Bulls of Pamplona" dismissed the plans as "laughable".

"I am actually in favour of anything that will increase awareness of how to run with the bulls but this wasn't a sensible proposal," he told The Local.

"Imagine trying to film a B-list celebrity running with the bulls in all the madness of the fiesta. It's laughable."