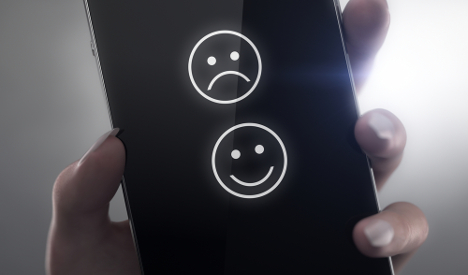 While the group who used party emoji least were the French, at 0.6 percent of the time.

The analysts at SwiftKey, a company that develops smartphone keyboard software, were able to track private and public emoji use through what users type in text, Twitter and other messages.

"Emoji are so popular, we wanted to look into the trends behind their use," SwiftKey spokesperson Ruth Barnett told The Local.

"Overall though, we all have a lot in common – smiley faces tend to be popular across the board and significantly outnumber the use of sad smileys."

The study went through more than a billion emoji used by people speaking 16 different languages worldwide between October 2014 and January 2015.

Analysts organized the emoji into 60 different categories, such as happy faces, romantic, money and raunchy.

Spaniards were category leaders for the party emoji, which include a party popper, confetti, a cake and a woman in a red dress dancing. Spaniards also used the face-blowing-a-kiss emoji much more frequently than the average, at 11.09 percent compared to the average of 7.33 percent.

Earlier this year, the hashtag #PaellaEmoji started trending across social media in a bid to get the Spanish dish its own emoji.

The most popular emojis worldwide were happy faces, sad faces, hearts, hand gestures and romantic ones. Reading materials, like books and newspapers, were the least used overall.

All languages tended to be more positive than negative, with 70 percent use of positive emoji use over 15 percent negative emoji use. The French were most often positive, while American Spanish speakers were the most negative.