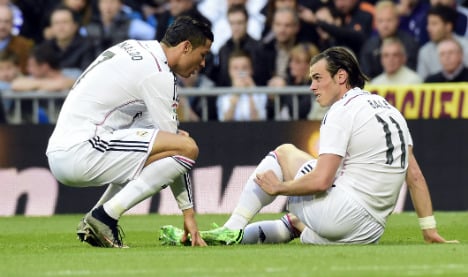 Bale went down holding his left calf after an innocuous looking challenge just five minutes into the game, but immediately signalled to the bench that he needed to be replaced, with Manchester United loanee Javier Hernandez taking over.

Modric then had to be withdrawn on the hour mark after suffering a heavy blow to his knee in a challenge with Malaga midfielder Recio.

"Modric has a problem in his knee, Bale in his calf," said Real boss Carlo Ancelotti.

"Right now we can't say anything. We will evaluate them in the coming days. They are not completely ruled out."

Modric only recently returned from a five-month injury layoff and his presence has coincided with Madrid's upturn in form in recent weeks.

However, Madrid sports daily AS reported that the Croatian is now set to miss another six weeks due to a sprained ligament in his right knee.

Real and Atletico are locked at 0-0 after the first leg last week in a repeat of last season's Champions League final.