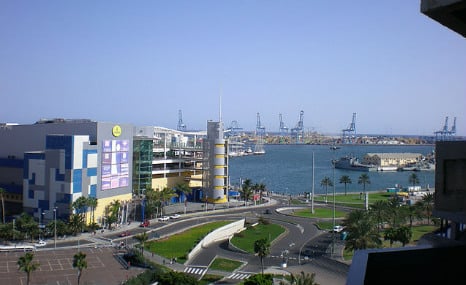 A team of specialists from Spain were struggling against high winds and choppy waters to stop the nearly 1,500 tones of oil carried by the stricken trawler from spreading towards the Mauritanian coast in an area that is home to whales and other unique marine life.

A fire broke out on the Oleg Neydenov last Saturday when the ship was moored at Las Palmas port on Gran Canaria island, prompting the 72 crew to be evacuated.

Fearing that the blaze could spread, Spanish authorities towed the boat out to sea where it sank Wednesday 24 kilometres south of Maspalomas, another town on Gran Canaria, Spanish rescue authorities said.

The group said the spill was unlikely to reach the scale of the 2002 Prestige oil tanker catastrophe, which saw 63,000 tonnes of fuel spilt into the Atlantic Ocean off northern Spain, but said there was still a threat to the environment.

"An oil spill is still an oil spill," it said in a statement.

In January 2014, the Russian trawler was at the centre of a a dispute between Russia and Senegal, which accused the Oleg Neydenov of fishing illegally in Senegalese waters.

Senegal seized the boat for three weeks and then towed it southwards towards the Guinea Bissau border.