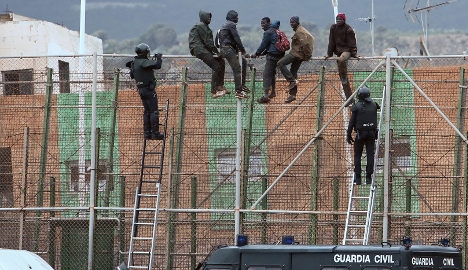 The EU urged Spain on Thursday to allow migrants trying to enter its north African enclaves to present their asylum requests without having to scale border fences.

The appeal from the European Commission, the executive of the 28-nation EU, implicitly urged the Spanish police not to immediately deport the migrants who arrive at the enclaves of Ceuta and Melilla.

Commission spokeswoman Nathalie Bertaud told reporters EU commissioner for migration, Dimitris Avramopoulos, would visit Spain Monday and Tuesday "to take stock of the situation on the ground" in light of a new law authorising such deportations.

"The recent establishment of offices at the border for requests for international protection in Ceuta and Melilla is seen by the Commission as a positive development," she said.

"However, it is necessary to ensure that the border crossing point is accessible in practice to allow asylum seekers to present their application, without having to scale the border fences," Bertaud added.

Bertaud said Avramopoulos would meet Monday in the capital Madrid with Prime Minister Mariano Rajoy following an invitation to the country by Interior Minister Fernandez Diaz.

"The Commission has closely followed the legislative developments concerning the establishment of a special regime for Ceuta and Melilla," she added.

"We will continue to monitor the practices implementing this new legislation."

The law passed by the lower house of the parliament on March 26 authorises the police to immediately deport migrants who arrive at Ceuta and Melilla, which have Europe's only two land borders with Africa.

The deportations have been sharply criticized by the Council of Europe and several human rights associations.

"The Commission recalls that any border surveillance measure must be proportionate to the objectives pursued, and it must be in compliance with the respect of fundamental rights and the principle of non-refoulement," she said.

Spain faces growing pressure from migrants coming from Africa, particularly through its two enclaves there. According to the authorities, more than 16,000 people tried to enter them in 2014 and nearly 5,000 succeeded, compared so some 3,000 in 2013.