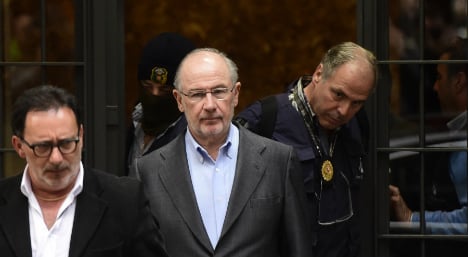 Spain's state prosecutor ordered the searches as part of an investigation into suspected money laundering, fraud and asset stripping, a source close to the investigation told AFP.

Police escorted Rato, a former economy minister with Spain's ruling conservative party, out of his apartment building in an upscale neighbourhood in central Madrid after searching his flat for nearly four hours.

They took him to his nearby office, which was also searched, before driving him back to his flat just after midnight.

Spanish media reported the probe could be centred on an alleged payment of €6.2 million ($6.6 million) which investment bank Lazard made to Rato in 2011, several years after he worked for the firm as an adviser.

Rato, a former stalwart of Spain's ruling Popular Party who has since be expelled from the group, has already been questioned on suspicion of fraud in an ongoing probe into the stock market launch of bailed-out lender Bankia, which he once chaired.

He is suspected of misrepresenting Bankia's accounts ahead of its doomed stock market listing and has been charged with fraud, embezzlement and forgery.

Rato has also been questioned in court as part of another probe into alleged spending sprees on company credit cards by him and other ex-managers of Bankia. He has denied wrongdoing in both cases.

Spain later received €41 billion from international creditors to protect its whole banking sector from collapse, though it avoided having to get a full sovereign bailout like Greece.

Thousands of customers have brought separate lawsuits against the Bankia group, saying they lost their money after being misled into converting their savings into the bank's shares.

'Law same for everyone'

The news that Rato is the target of a fresh corruption investigation comes as Spain is gearing up for regional and municipal elections on May 24th and a year-end general election.

Polls show the Popular Party will suffer heavy losses, in part due to voter anger over a string of graft cases that have tainted top party officials in recent years.

Party officials avoided commenting directly on the latest Rato investigation and stressed instead the measures the government has taken to fight corruption.

The head of the main opposition Socialist Party, Pedro Sanchez, called for the resignation of Budget Minister Cristobal Montoro and for a parliamentary enquiry.

Corruption scandals have tainted both of the main parties and have fuelled the rise of two new challengers that have rallied against graft: anti-austerity party Podemos on the far left and Ciudadanos on the centre-right.

Rato was a finance minister in the conservative government of Jose Maria Aznar, which was in office from 1996 to 2004.

He then led the International Monetary Fund from 2004 to 2007, getting the Washington-based job thanks to his reputation for presiding over the early stages of Spain's construction-led boom.

Rato left the IMF in 2007 for "personal reasons" and was later handed the job of managing Caja Madrid, one of the regional savings banks that fused to form Bankia in 2010.