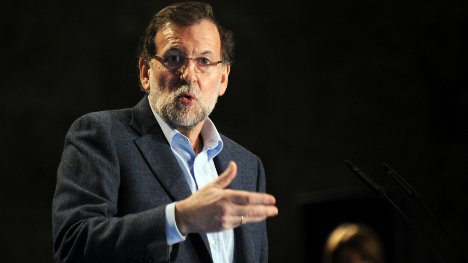 According to the new study, 94 percent of young Spaniards think they are paying for the "errors" and "greed" of previous generations.

The survey was carried out by Cambridge Monitor for Cambridge University Press. Spanish Millennials (1,200 people between the ages of 16 and 24-years-old) were interviewed on far ranging topics, from politics and religion to English-learning and their views on the future. What may come as a surprise is that the person young Spaniards dislike the most is current Prime Minister Mariano Rajoy. He was followed by Spanish reality television personality Belén Esteban, who most recently won the Spanish version of Celebrity Big Brother.

"But it seems logical to think that he embodies all the problems that young people are experiencing nowadays," he added.

Another surprising result of the survey is that 84 percent of young Spaniards say they will leave Spain in the next few years to look for work abroad.

"This is particularly striking, but understandable when you take into account the unemployment rate among young Spaniards," Redondas Barreiro said.

Their generation has borne the brunt of Spain’s economic crisis; the country’s current rate of youth unemployment is 50.7 percent, the second highest in the European Union after Greece.

The study also shows a seachange in the attitudes of young Spaniards when it comes to learning English.

While older generations are among the worst in Europe – Spanish Prime Minister Mariano Rajoy famously does not speak English – younger Spaniards are keen to pick up the foreign language.

The study shows that 70 percent of young Spaniards think that being able to speak English is more important than having a university degree.

Unsurprisingly, with their dislike for Rajoy, young Spaniards are far more sympathetic to new-kid-on-the-block Pablo Iglesias, the pony-tailed leader of left-wing party Podemos.