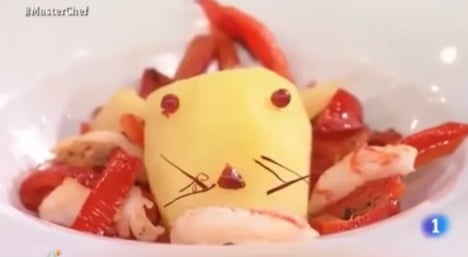 Spain is renowned for its food, from its delicious tapas to its elegant haute cuisine, but a contestant on the television cooking programme MasterChef has turned it into somewhat of a laughing stock.

“This is an insult to my intelligence,” scoffed judge Pepe Rodriguez, a renowned Spanish chef.

“Humour is important in cooking, but looking at this… I don’t find it funny at all.”

Alberto had presented his dish, a tomato and strawberry gazpacho with roast peppers and a potato “imitating a lion’s head” relatively confidently, but his bravado soon slipped away as he received a mauling from the judges.

“It is an insult to the 15,000 people who applied to be on the third series of MasterChef,” Rodriguez told the teenager.

While Alberto assured the judges he did not mean to insult them with the dish, Rodriguez reminded him that the potato was raw, how could they not be insulted?

“It’s ridiculous,” added judge Jordi Cruz, one of the youngest chefs to receive a Michelin star.

In a controversial move, the judges immediately kicked Alberto off the programme without deliberating on the decision.

It did not take long for the clip to go viral, with social media users sharing memes of the episode, substituting Alberto’s potato lion for other famous lions such as the Wizard of Oz’s Cowardly Lion and Leona Lewis with the hashtag #Leóncomegamba (Lioneatsprawn).

The MasterChef contestant has been dubbed the culinary version of Cecilia Gimenez, the Spanish woman who famously tried to restore a prized fresco of Jesus, the result was more monkey than Christ-like.

A special gift for King Felipe from Podemos