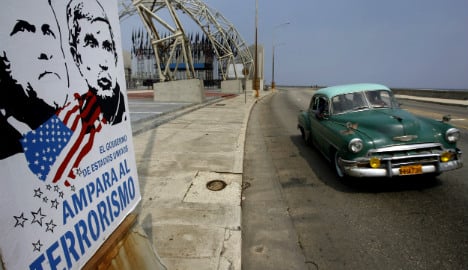 The move was among assurances given to Washington by Havana as the Obama administration seeks to strike Cuba from its list of state sponsors of terrorism.

The White House announced Tuesday that following a lengthy review by the State Department, President Barack Obama is planning to remove Cuba from the blacklist which has hampered its access to the US and global banking system and stymied arms exports and sales.

The step could pave the way to restoring US-Cuban diplomatic ties frozen for half a century.

Cuba was placed on the terror blacklist in 1982 amid concerns it was seeking to foment revolution in Latin America, notably through supporting the left-wing FARC guerrillas in Colombia, and also because of suspected ties to Eta.

"There are some Eta members who have been in Cuba," Rathke said.

"The Cuban government has provided assurances that it would never permit the Eta members living in Cuba to use Cuban territory for activities against Spain or any other country."

And he revealed that "Cuba and Spain have agreed to a bilateral process to resolve" a dispute over Madrid's demand for the extradition of two alleged Eta members.

The State Department review had also concluded that "there is no credible evidence that the government of Cuba has, in the last six months, provided material support… to members of the FARC."

Indeed, Havana has been hosting peace talks between Bogota and the Revolutionary Armed Forces of Colombia (FARC) in a bid to resolve one of the world's longest running insurgencies.

Havana has also promised to launch negotiations, once diplomatic ties are established, on the fate of several American fugitives living in Cuba.

"The return from Cuba of fugitives from US justice is an issue of longstanding concern to the United States," Rathke said.

"We see the reestablishment of diplomatic relations and the reopening of an embassy in Havana as the means by which we'll be able, more effectively, to press the Cuban government on law enforcement issues such as fugitives."

The US has in particular been seeking the return of JoAnne Chesimard, a former member of the Black Panthers accused of killing a New Jersey policeman in 1973, and William Guillermo Morales, convicted in 1979 of making bombs for an extremist Puerto Rican independence group.