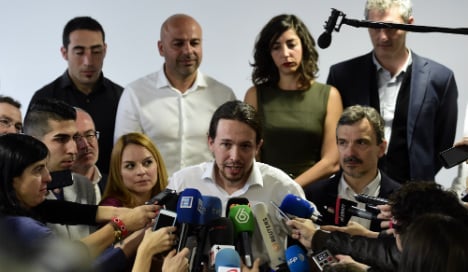 The left-wing party which, at barely a year old, has beenstirring up a storm in Spanish politics, has cancelled its list of candidates in La Rioja.

The national leadership of the party has cancelled the nomination of local party leader, Raul Ausejo, after they detected "fraud" and "census manipulation" during the primaries that were held two weeks ago, according to Spanish daily El País.

The leadership decided on Tuesday, during a meeting, to invalidate the election of the top 14 candidates on their list and to call new primaries to fill the vacancies, Podemos party secretary Sergio Pascual, told reporters during a press conference on Tuesday evening.

Because Spain operates on a proportional representation electoral system, parties present a list of candidates by region, rather than the constituency process of some other countries like the UK.

The sacking of the top 14 candidates on the list means those lower down automatically move up, catapulting the secretary general of Logroño, German Cantabrana to top of the list.

Podemos supporters in La Rioja can vote on Thursday April 16th for the seven candidates needed to complete the list.

That Podemos has been so quick to clamp down at the hint of fraudulent behaviour sets them apart from Spain’s more established political parties, who typically launch long, drawn out investigations into the corrupt activities of their members.

Members of the ruling Popular Party, including former treasurer Luis Barcenas, have been embroiled in the highly publicized Gürtel corruption case since 2009 and while allegations of fraud have swirled, very few have resigned until charges are brought.

The opposition Socialist party, meanwhile, has been the subject of a fraud case in the southern region of Andalusia dating back over ten years. Despite being named as suspects, former regional presidents Manuel Chaves and José Antonio Grinán have remained at their posts at the regional parliament.

Podemos leader Pablo Iglesias is due to meet King Felipe VI in Brussels on Wednesday, April 15th, as the Spanish monarch travels to the European Parliament for a meeting with  Spanish MEPs.