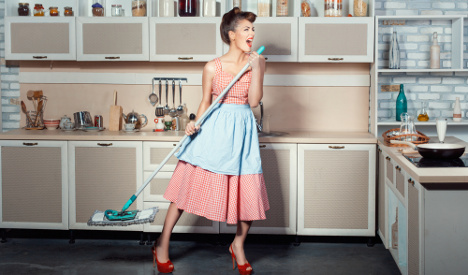 Photo of a woman using a mop: Shutterstock

When Manuel Jalón invented the world’s first mop and bucket in 1956 little did he know that his invention would one day play a vital role in housework around the world.

Read about other surprising inventions by Spaniards

The Spaniard, born in Logroño in 1925, invented the contraption with the original aim of helping people avoid injuring their knees and damaging their hands from scrubbing floors.

"I want to bring dignity to a humble job," was a phrase he often used to describe the invention. And it was a revelation; finally people could mop and wring out the dirty water "with great comfort" Joan Servelló, design expert at Balclis auction house, told local newspaper Heraldo de Aragón.

Balclis auction house estimates that there are very few examples left today of the first design, one of which currently resides in the Museum of Decorative Arts in Barcelona.

The mop coming up for auction on Wednesday, unlike the one in the Barcelona museum, features the brand name Rodex, the company which first made the mops.

Jalón, an aeronautical engineer, was inspired by the system used to clean aeroplane hangars in the United States, which included large brushes and rags on sticks.

But the invention was slow to catch on with Spaniards.

Jalón had to stage many live demonstrations of his strange new invention before it slowly began to gain popularity in his homeland, before quickly taking over the world.

The mop to be auctioned on Wednesday consists of a 1.18 metre handle and a bucket, complete with two built-in rollers, that measures 30 centimetres high and 18 centimetres in diametre.

Jalón’s original design continued to be produced until the mid-1960s, when production switched to plastic mops and buckets.

After selling more than 60 million mops worldwide, Jalón, along with his partners at Rodex, sold the company to Dutch multinational Curver BV.

Jalón continued to invent – another of his most famous ideas was the reusable hyperdermic syringe.

He died at home in Zaragoza in 2011 aged 86 years old, his simple invention having, by this time, taken over the world.