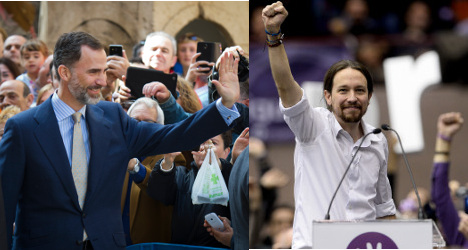 King Felipe VI will be in Brussels to meet Spanish MEPs at the European Parliament, including the leader of left-wing party Podemos, which has seen a rapid rise in popularity since its beginnings little over a year ago.

It could be a potentially awkward encounter in light of Pablo Iglesias' outspoken views on Spain's monarchy, including the call for a referendum on its future if Podemos came to power.

In June 2014, the pony-tailed former political science lecturer said the Spanish monarchy was linked to "corruption" and "the past" and emphasized that Podemos would push for a referendum on its future.

A mere 24 hours before the meeting, left-wing Spaniards are celebrating the anniversary of the country’s Second Republic, with left-wing parties taking to the streets of Madrid to take part in a commemorative march in the city centre, although representatives from Podemos will be notably absent.

In what could be seen as Iglesias distancing his party from the far-left in Spain, he has said no Podemos representatives will take part in the march, which will include parties such as the United Left, the Spanish Communist Party, the Republican Left, the Greens and the Communist Youth Union of Spain.

The Second Republic was the democratic regime that existed in Spain between 1931 and the end of the Spanish Civil War in 1939.

It was proclaimed on April 14th 1931 following municipal elections in which anti-monarchist candidates won the majority of votes, sending King Alfonso XIII, the grandfather of King Juan Carlos, into exile.

The meeting on Wednesday has been long anticipated by Podemos who admitted that they have been pushing for an audience with the monarch for some time.

In Febraury when it emerged that Podemos had asked the Casa Real for a meeting, Pablo Iglesias was quoted in Spanish media as saying:

"We are requesting an audience with the Head of State and for me it would be a pleasure to converse with him. We will have many differences but I want to express to the current Head of State how we see things."

MEPs from Spanish parties Bildu (the Basque nationalist party), the United Left, CDC (Democratic Convergence of Catalonia) and the ICV (Initiative for Catalonia Greens) have rejected the offer to meet King Felipe, according to Spanish daily ABC, while MEPs from the United Left have called for a "toast to the Republic" in the European Parliament to commemorate April 14th.

The latest polls show support for Podemos has stagnated after its huge surge in popularity and Spain's four biggest parties are now neck and neck.