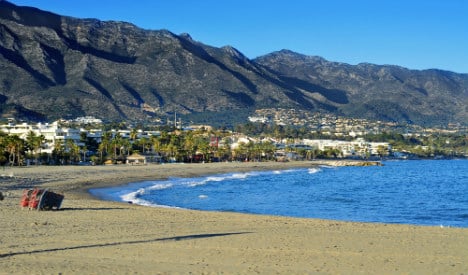 Ümit Nalbant, 30, a computer science teacher rushed into the waves when three of the pupils he was in charge of on a student trip were swept away in a freak wave while paddling La Venus beach, Marbella.

The Local has learnt from a journalist in Turkey that Nalbant from the town of Kırklareli was engaged and had planned to marry later this year.

Two of the students, Şakir Çelik, 19, Serdar Fidan, 18,drowned and a third, Hurşit Özbay was rescued by a surfer who brought him to shore on his board.

He had stopped breathing but was resuscitated on the beach and is currently in a “critical but stable condition” said Francisco Martos, medical director at the Costa Del Sol hospital in Marbella.

The four were among a group of ten students and two teachers from Gelibolu School for the deaf from Turkey’s western region of Çanakkaleand were on a two-week a special education exchange trip.

One of the divers involved in the rescue work told the Diario de Malaga that there had been strong winds in the area for the last two days, making the sea dangerous.

The tragedy at 3.30pm on Monday happened on a beach where there were no lifeguards present nor a warning flag advising about swimming conditions.

It has reignited the debate over whether Spain’s beach should be manned with lifeguards beyond the current June to September high season period.

Relatives of the victims have been informed that according to eyewitnesses the three students had been in an area of the beach popular with surfers and were paddling in the shallow waves.

"The three boys were swept off their feet by a big wave," Ramazan Fidan, the uncle of Serdar, told the Turkish newspaper Bugün.

A Turkish official told media outlets that Nalbant had jumped into the water to rescue the students when he spotted them drowning, according to Turkish newspaper the Daily Sabah.

Emergency services were called to the scene and took one student to hospital. They later retrieved the bodies of the three drowning victims.

A judge has opened an investigation into the deaths.

Marbella town hall declared three days official mourning over the tragedy and held a minute's silence for the victims.