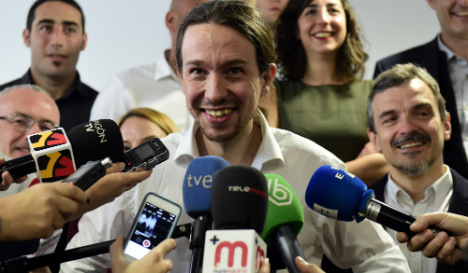 After watching its ratings rocket during the autumn and winter, support for the radical party appears to have stagnated at 22.1 percent, down 1.4 percent on a similar poll conducted by Metroscopia in March.

With a general election expected at the end of the year, Podemos still leads the Socialists, the ruling conservative Popular Party (PP) and the new centrist Ciudadanos (Citizens) movement.

Worryingly for Podemos, which is allied with Greek's new radical Syriza government, the two main traditional parties bounced back strongly in the poll, pointing towards an eventual coalition government.

The Socialists rose to 21.9 percent, according to the survey carried out between April 7 and 9, on the back of a regional election victory in Andalusia in March, when they beat Podemos into third place.

They are banking on a recovery in the economy, which was plunged into deep recession by the 2008 financial crisis, although 63 percent of those questioned by Metroscopia said "the improvement (in the economy) had nothing to do with measures taken by the government."