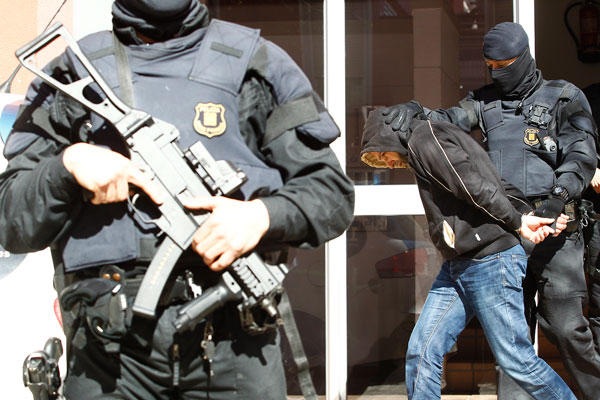 Judges in Madrid questioned the 11 suspects, including a woman and a 17-year-old, who were arrested on Wednesday in Spain's northeastern Catalonia region.

Ten of were accused of belonging to the Islamic Brotherhood for Preaching Jihad, a group in Spain suspected of recruiting members for the Isis insurgency, the National Court in Madrid said on Friday.

An eleventh suspect was accused of possessing arms and explosives, Judge Santiago Pedraz said in a written ruling.

Isis controls swathes of Syria and Iraq, where it has committed highly publicised abuses including mass kidnappings and executions.

Authorities now fear the jihadists may extend their attacks into Europe.

"They were considering abducting a person in Spain, dressing them in an orange overall in the style of the group known as Islamic State, interrogating them and cutting their throat in order to broadcast it" by video, a source in the investigation told AFP.

Isis has frequently broadcast footage showing their execution victims wearing orange suits of the same style given to prisoners at the controversial US military prison in Guantanamo Bay.

Gang members had also discussed "abducting the director of a bank branch" for ransom, the source added.

The court remanded in custody seven of the suspects on terrorism charges, and released three others pending further proceedings.

After a separate hearing another judge sent the 17-year-old to a juvenile detention centre, a court source added.

Officials said on Wednesday that five of the suspects were Moroccans, five Spanish and one Paraguayan.

They said the cell had already sent at least four recruits to Syria and Iraq, where Isis declared a "caliphate" last year.

A source in the investigation said the suspects appeared to have been radicalised "very quickly".

He allegedly proposed attacks with guns and grenades against synagogues, security forces and the Catalan regional parliament.

Police found on his mobile phone photographs of potential targets for attacks in Barcelona such as a hotel, a police station and a shopping centre, the ruling said.

The judge said another of the suspects was a "neo-Nazi" who was caught with a hand grenade, knives, guns and ammunition, while another had material that could be used to make bombs.

Spanish authorities have arrested around 40 suspected jihadists so far this year — five more than in the whole of 2014.