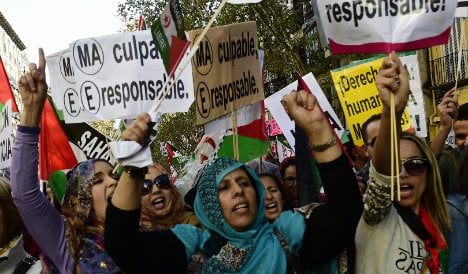 The 11 ex-security officials and governors are accused of taking part in ethnically motivated torture, killings and detentions in the former Spanish colony between 1975 and 1991.

Judge Pablo Ruz at Spain's National Assembly ruled on Thursday that there was a case to answer in court. He called for the arrest and extradition of seven of the accused and asked the Moroccan courts to find and notify the other four.

Victims cited in the ruling claimed they were beaten, burnt, electrocuted and sexually assaulted while held by Moroccan security forces. Relatives of others said their loved ones simply disappeared.

Citing testimonies from victims, their families and other witnesses, Ruz said there were "rational indications of criminality", upholding allegations by state prosecutors who want the 11 brought to trial.

"The deeds described in this ruling would constitute a crime of genocide," his ruling said.

Morocco took control of most of Western Sahara in November 1975 after Spain withdrew and fought a 16-year conflict against the Sahrawi pro-independence Polisario Front.

Repeated bids by UN mediators to hold a referendum on self-determination for the Sahrawis have since failed.

The judge said his investigation yielded evidence that between 1975 and 1991, "there was a generalised and systematic assault against the Sahrawi civil population by the Moroccan military and police".

Some of the victims still had Spanish national identity cards at the time despite the territory having come under Moroccan control.

The accused include Abdelhafid Ben Hachem, who was the top Moroccan governor for Western Sahara until 1997.

Others include two colonels, Abdelhak Lemdaour and Driss Sbai, accused of overseeing torture by Moroccan military forces in the Smara region, in Western Sahara.

Among the victims cited in the report was Hadram Abderrahman, who was tortured for a month and half at the Smara barracks in 1975, when she was 25.

She said soldiers burst into her home while she was breastfeeding her baby daughter, snatched the child from her and dragged Abderrahman to the barracks where she was beaten and sexually assaulted.

Thursday's ruling was welcomed by human rights campaigners but neither the Spanish nor Moroccan governments had commented by Wednesday evening.

Western Sahara is a sensitive issue for relations between Madrid and Rabat, which have valuable economic ties.

As well as the alleged crimes by the 11 named suspects, the ruling listed other atrocities during the conflict of which it said the perpetrators were not known.

Among them was the dropping of napalm by Moroccan warplanes on a Sahrawi camp on February 20, 1976 which killed 39 people.

It likewise listed the killings in the Amgala region in February 1976 of eight Sahrawis whose remains were found in mass graves in 2013.

The suspects have several days to appeal Thursday's ruling.

The court investigation was launched in 2007 by former human rights judge Baltasar Garzon after rights groups brought a case alleging 500 Sahrawis had disappeared since 1975.