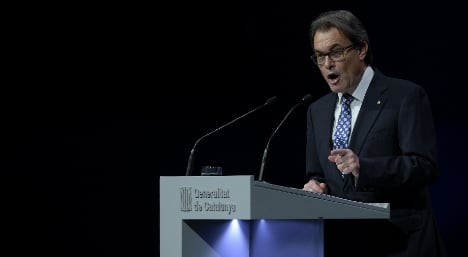 It was Bob the Builder's catchphrase, it did wonders for Obama, and then it was repackaged as "Podemos" by Pablo Iglesias as the name for his radical left-wing anti-austerity party.

But now Artur Mas is hoping that it will prove as successful a slogan in his battle with Madrid.

The pro-independence President of Catalonia made the three words his focus at a conference held at Columbia University in New York at the weekend.

Entitled "Catalonia at the Crossroads", Mas deliviered a speech emphasizing that those characteristics so important to President Obama’s 2008 election campaign – the idea of "we" and the "dream" – were also key to the issue of Catalan independence.

"Your president, Barack Obama, in his famous speech in Selma, said the most important word in democracy is 'we'," said Mas during a speech at Columbia University.

"'Yes we can' was how your president asked you to vote, and Catalonia also believes in the 'we' – so 'we' will vote in September and 'we' will decide our own political future as a nation," he said.

According to Catalan daily La Vanguardia, Mas presented Catalonia as a potential "good neighbour" and "trustworthy ally" to the USA.

"President Obama said that freedom and self-determination did not only correspond to countries, but were universal values. For this reason, in the September elections we need a majority in favour of independence to make a new constitution," he said.

Mas was speaking at the Columbia University conference in front of an audience of 200 people, most of whom were from a Catalan or Spanish background.

The Spanish politician used the opportunity to set out reasons for Catalonia’s secession from Spain.

"We are explaining these points because we are seeing that creating a new state, like the USA did when it separated from the United Kingdom, involves explaining the reasons for wanting to separate."

Mas, who gave his speech entirely in English, was introduced by economist and Columbia professor, Xavier Sala i Martin, who likened Catalonia's struggle for independence from Spain to the Biblical battle of David and Goliath, reminding the audience that the giant was "not as strong as people thought".

"And now David will make the speech," joked Mas, as he took to the stage.

The trip marks the Catalan president’s third official visit to the United States.

Catalan nationalist parties and associations recently signed a road map to secede from Spain in 2017 if independence movements win the right to hold a referendum.

Nationalist leaders have called for a regional vote on September 27th after Madrid blocked their bid for a referendum on independence.

During a symbolic independence referendum held in November last year, that the top court in Spain ruled unconstitutional, only 1.9 million out of 6.3 million potential voters cast their ballot in favour of secession.