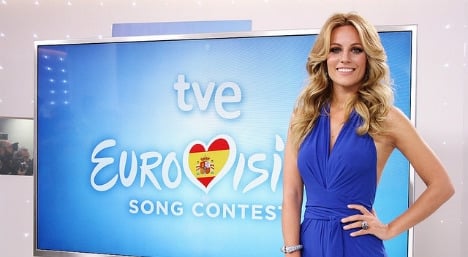 This year’s Spanish Eurovision hopeful might not be singing in English but she has released a video on the singing contest's official website introducing herself in the language.

The 29-year-old Edurne, who is dating Manchester United player David de Gea, released the clip to court the vote of those in her boyfriend's adopted homeland.

"Hello everybody!" beams the Spanish pop singer  at the beginning of the video, before revealing that she is "so, so, so happy" to be representing Spain at this year’s contest, in Vienna.

As one of the "big five" countries – that contribute the most money to the European Broadcasting Union – Spain will automatically go through to the Eurovision Song Contest final on May 23rd, the 60th edition of the singing competition.

The blonde starlet, who rose to fame in 2005 after appearing on Spanish TV talent show Operación Triunfo, describes in the video how she first performed as a child.

"I realized the music was my passion," Edurne reveals in the one minute 12 second clip.

"I took part in a lot of TV shows, singing, dancing, so funny," she says.

The singer also appeared in the musical Grease for five years, building up plenty of stage experience that will no doubt come in handy on the big night in Vienna.

"My next challenge is Eurovision and it’s a dream for me and I’m so happy and so excited and I can’t wait to be there with all of you and I hope you the same with me."

She ends the clip by belting out a line from her Eurovision entry, Amanecer (Daybreak).

Edurne recently caused some controversy after she agreed that the northern city of Manchester in the UK was "uglier than the back of a fridge".

The singer is dating Manchester United goalkeeper David De Gea so has no doubt visited the city several times.

Manchunians were up in arms at her comments, hitting back that Madrid was not so special, prompting The Local to once and for all decide which was better – Manchester or Madrid.