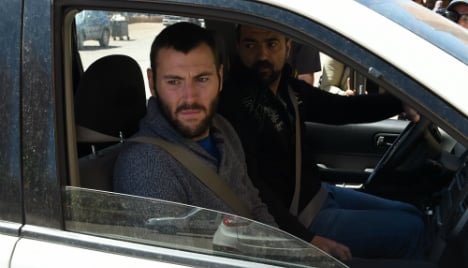 Bolivar was stretchered from the ravine in the High Atlas mountains on Sunday, then taken to a hospital in Ouarzazate in southern Morocco, from where he departed Tuesday on a Spanish government plane.

Moroccan officials on Monday declared him to be in good health. After landing in Spain he headed to his southern home city of Granada, the ministry said.

His two companions, 41-year-old lawyer Gustavo Virues and another policeman, Jose Antonio Martinez, 41, died while waiting to be rescued from the ravine hundreds of metres deep, officials said.

The Spanish foreign ministry could not confirm on Tuesday when the bodies of the other cavers in the accident would be repatriated.

Companions of the three climbers alerted authorities on Tuesday that they were missing but they were only spotted by Moroccan search teams Saturday morning.

The three men were members of the Mountaineering Federation of Andalusia, which accused Moroccan authorities of being slow to launch a rescue mission.

Another member of the climbing party, Jose Morilla, also blamed the Spanish government, in comments to Spanish media.

Spain said it offered on Friday to send a plane with a team of rescuers to Morocco but they were only allowed to travel to the scene on Sunday.

Spain's Prime Minister Mariano Rajoy on Monday said Morocco had made a "great effort" to rescue the cavers.

Spanish Foreign Minister Jose Manuel Garcia-Margallo admitted on Tuesday however that there had been "dysfunctions" in the rescue effort.

"It is true that the plane did not get the scene at the moment we would have liked," he told reporters.

"There were, as there are in all such misfortunes, dysfunctions in the handling of it," he said.

"The (Spanish) foreign ministry from the first moment requested authorisation" to send a rescue mission, he added.

The leading opposition Socialist Party will demand an explanation from Garcia-Margallo in parliament on April 15, the party's parliamentary spokesman Antonio Hernando told a news conference on Tuesday.