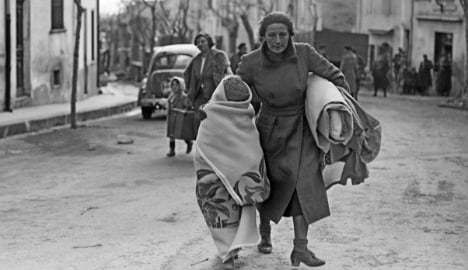 A mother and her child arrive in France having fled Spain after Franco's victory. Photo: AFP

On this day in 1939, General Francisco Franco declared victory for the Nationalists over the Republicans in the Spanish Civil War during a radio speech.

It had been a bloody three years since the war began on July 18th 1936 when right-wing military officers started a revolt to overthrow the leftist Republican government.

The rebels, known as The Nationalists and headed by General Francisco Franco, were frustrated with the liberal government, supported by the educated middle class and urban workers.

The Spanish monarchy had been ousted after Spanish King Alfonso XIII authorized an election in 1931, in  which people could vote on what the government should be. Photo of members of one of the International Brigades Photo: Imperial War Museum/Wikipedia Commons.

The Basque Country and Catalonia relished living in virtual autonomy during the Second Republic.

Franco's forces began to seize regions in Morocco and the Canary Islands in 1936 before moving to the mainland.

The country became divided as the warring parties fought for dominance, with Franco establishing his own Nationalist government in Burgos.

The Republicans received support from the Soviet Union and the International Brigades, made up of European and American soldiers, who were recently honoured for fighting in the grisly Battle of Jarama in 1937.

Franco's Nationalists were supported by fascist Italy and Nazi Germany. Violence on both sides raged on, with horrific scenes inspiring such works as Pablo Picasso's famous mural,Guernica, a depiction of a Nationalist bombing on the Basque Country town.
Around half a million people were killed over the course of the civil war. Picasso's Guernica painting at the Reina Sofia museum in Madrid. Photo: Cristina Quicler/AFP.
The war came to an end in 1939 when Franco conquered the Republican strong-hold of Catalonia, after which the rest of Spain soon fell.
The Nationalists occupied Madrid on March 28th and controlled all of Spain by March 31st. On April 1st, Franco declared victory in a radio speech.
He would go on to lead Spain with an iron grip for 36 years until his death in 1975. It was only then that Spain could take its first tentative steps towards democracy.

Franco remains a controversial figure in Spain, with some still honouring his death each year.