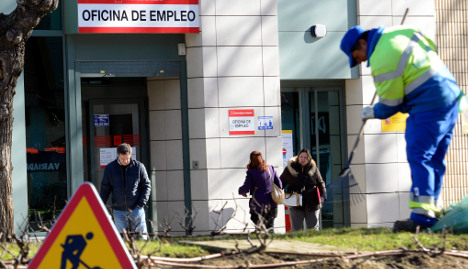 Despite Spain's unemployment rate reaching its lowest rate since 2012, it remained the second highest in the European Union at 23.2 percent, just behind Greece's 26 percent, according to the latest Eurostat figures.

Spain also had the second highest youth unemployment rate at 50.7 percent – a decrease of 0.2 percent from January. Youth unemployment, or those under 25 years old, in Greece was 51.2 percent.

Eurostat reported the number of unemployed people in Spain to be more than 5.3 million, meaning unemployed Spaniards make up more than 22 percent of the EU's unemployed population of about 24 million. About 795,000 of those unemployed in Spain are under 25.

The Spanish unemployment rate has been on a gradual decline since it hit a high of 26.3 percent in 2013 between February and March.

The country's employment ministry reported in March that the number of people who registered as unemployed fell by 0.3 percent in February, with roughly 4.5 million people registered.

Eurostat's data also reported that a slightly higher rate of females were unemployed than males, with 24.3 percent of Spanish females unemployed and 22.2 percent of males.

Overall, the unemployment rate across the 28 EU member states was 9.8 percent in February, which was the lowest rate since September 2011.

Youth unemployment in the EU remained at 21.1 percent, or about 4.8 million people.

Germany had the lowest overall unemployment and youth unemployment rates at 4.8 percent and 7.2 percent respectively. Austria was the second lowest at 5.3 percent overall and 9.0 percent of those under 25.