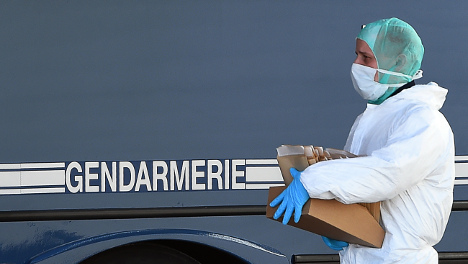 A police officer carries DNA samples of victims of the Germanwings air crash to be tested at a mobile laboratory. Photo: AFP

Prosecutor Brice Robin added that an access road was being built for all-terrain vehicles to reach the site where 150 people died.

The road will help with the removal of large parts of the plane, and could be completed by Monday night, Robin said.

Investigators have faced a huge task in trying to recover bodies and search for a second "black box" at the site, which is extremely hard to access and has required specialist mountain police to accompany search teams.

The Germanwings flight crashed on Tuesday, breaking up on impact and leaving not a single body intact, according to police working at the scene.

French officials say the plane's voice recorder indicates that Andreas Lubitz, 27, locked the captain out of the cockpit of the Germanwings jet and steered Flight 4U 9525 into the mountainside.

They believe that the more senior pilot, identified by Germany's Bild newspaper as Patrick S., tried desperately to reopen the door during the Barcelona to Düsseldorf flight's eight-minute descent after he left to use the toilet.

The mass-circulation's Sunday edition reported that data from the cockpit recorder showed the captain shouted: "For God's sake, open the door", as passengers' screams could be heard in the background.

It said "loud metallic blows" against the cockpit door could then be heard, before another warning alarm went off and then the pilot is heard to scream to a silent Lubitz in the cockpit "open the damn door".

The Sunday edition of Germany's Bild tabloid and the New York Times, which cited two officials with knowledge of the investigation, said Lubitz had sought treatment for problems with his eyesight.

It is thought to be a retinal detachment, the German weekly said.

It also reported that Lubitz's girlfriend with whom he lived in the western city of Düsseldorf was believed to be pregnant.

It gave no sources but said the teacher, who taught math and English, had told pupils a few weeks ago she was expecting a baby.