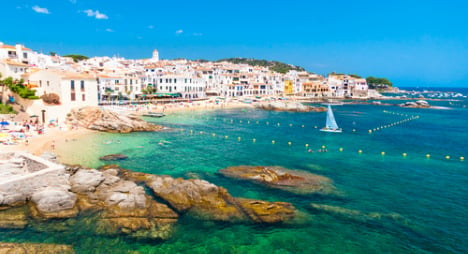 Temperatures in Spain could reach a maximum of 30 degrees during Easter week, with temperatures set to rise by eight degrees on Friday as an anticyclone settles over the country, the country's state meteorological agency (AEMET) has announced.

While the extreme north of Spain is set to experience cloudy skies and drizzle, much of the rest of the country will bask under clear, sunny skies from Friday March 27th. Friday's sunny conditions for much of Spain (above) will continue throughout Easter week.

On Saturday March 28th and Palm Sunday fine weather is forecast "across all areas" according to AEMET except in the extreme north of the country where light rain is expected across the Basque Country, Cantabria and Asturias.

"Temperatures will rise progressively throughout the week until by Friday, they will be above average for this time of year – maximum temperatures could reach 30 degrees in the middle of the country," according to a statement on AEMET’s website.

The weather agency has forecast temperatures of 22 – 24 degrees along the Mediterranean coast, including Catalonia, 22 – 24 degrees in the south of the country and between 24 – 30 degrees in Seville, and areas of Murcia, Extremadura and Huelva.

Temperatures in Madrid are likely to reach 26 degrees during Semana Santa.

In Asturias, Galicia and Cantabria, temperatures will be cooler but still pleasant, from 18 – 20 degrees.

The weather predictions will please those planning to participate in the Holy Week parades that take place across Spain and are particularly celebrated in Andalusia.

Inclement weather, or even the threat of it, can cause the religious processions to be cancelled. Even the lightest drizzle forces the cancellation of processions because cobbled streets can become slippery underfoot and dangerous for those transporting heavy religious floats on their shoulders.