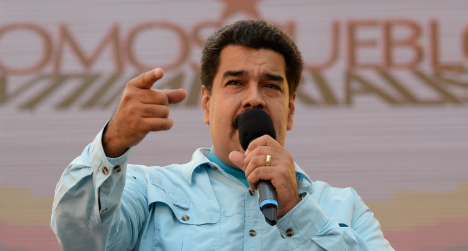 Leftist Maduro, whose country is in economic freefall after adopting a government-run economy while oil prices slide, said the leftist Spanish statesman had signed up with a group of far-right plotters in Spain, Colombia and the United States.

Gonzalez, who was in power from 1982-1996, presided over modernization in Spain in which social welfare was a top priority and economic growth was left to markets and EU subsidies.

"Now they've got Felipe Gonzalez, who has just signed on openly – bringing in a great big salary in euros – to the campaign against Venezuela, to support a coup in Venezuela, the coup against me," Maduro alleged in his weekly address on state media.

Havana-allied Maduro, in remarks similar to those often made by Cuban leaders on state media, further charged that the far-right coup plotters "don't know what our constitution says, and they are trying to cause foreign intervention in Venezuela."

Worse, Maduro charged that in the past, his political godfather former president Hugo Chavez had "thrown out" Gonzalez when he came to Caracas to "propose dirty business" such as selling off telecoms firm Cantv "to a consortium that he (Gonzalez) was representing."

Just Monday, a source close to Gonzalez told AFP that the former Spanish prime minister, a lawyer by training, would represent jailed members of the Venezuelan opposition, Leopoldo Lopez and Antonio Ledezma, at their families' request.

Meanwhile in an interview with Spain's Cadena Ser on Tuesday, Gonzalez said Venezuela's government "is failing seriously on two issues that are very basic to a state being able to function," referring to the economy and lack of public safety.

Maduro recently accused Washington of backing an opposition plot to overthrow him in a coup that he says would have involved bombing the presidential palace. The US government has dismissed the charges as baseless.

Relations hit a new low earlier this month when President Barack Obama slapped new sanctions on the Venezuelan government, calling the country "an extraordinary threat to the national security" of the United States.

An angry Caracas responded by recalling its envoy to Washington and ramping up its military preparedness.