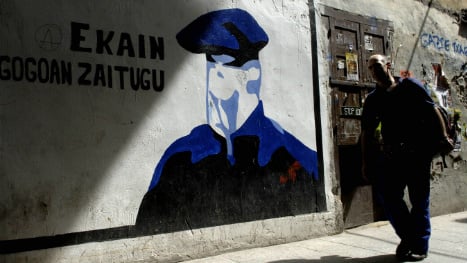 Sabin Mendizabal Plazaola, 34, who had been on the run for six years, was held in Saint-Palais in the foothills of the Pyrenees on an international arrest warrant for allegedly injuring a Spanish police officer who had been chasing him, Madrid said.

Its interior ministry said he was "on the most wanted list of ETA members" for giving support to one of the group's most active units, "commando Donosti", which operated in the San Sebastian region.

He disappeared in 2009 after a Spanish court sentenced him to prison for throwing an explosive device at the headquarters of Spain's ruling Popular Party in the Basque town of Ermua.

Mendizabal Plazaola was also was accused of throwing Molotov cocktails at a business owned by the Popular Party mayor of the city of Vitoria in 2005.

Eta – or Euskadi Ta Askatasuna, which means Basque Homeland and Freedom in Basque — declared a "definitive end to armed activity" in October 2011 but it has not formally disarmed nor disbanded as the Spanish and French governments demand.

Eta is blamed for the deaths of 829 people in a four-decade campaign of shootings and bombings to create an independent Basque homeland in northern Spain and southern France.