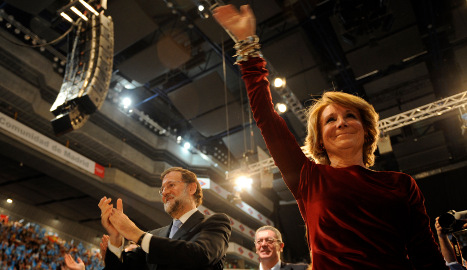 A staffer to Esperanza Aguirre is being questioned in a corruption scandal that has implicated many of the ruling conservative People's Party members. Cristina Quicler / AFP
Isabel Gallego, Aguirre's campaign manager of publicity and media, was formally named a suspect and will be interrogated by Judge Eloy Velasco, El Pais reported.
Gallego is to be questioned for her connection to an ongoing corruption scandal called 'Operation Punica' involving numerous business people and politicians allegedly involved in the exchange of payments for the reward of public contracts amounting to nearly €250 million.
Dozens have been implicated in the scandal so far, including former general secretary of the ruling conservative Popular Party (PP) in Madrid Francisco Granados.
Specifically, Velasco will be questioning Gallego about a contract worth €60,000 for a firm owned by Alejandro de Pedro, who is suspected of being the person keeping Granados out of trouble.
Telephone recordings connect Gallego to work paid for through public funds, conducted to improve the image of the community of Madrid online, though no evidence of the work contracts was found because they were sent through email, according to El Pais.
Additionally, sources close to Gallego said the contracts stopped after de Pedro was accused last year.
Gallego has been working as Madrid's media director since 2003. Aguirre on Friday insisted that her aide would remain in her post.
Aguirre announced a return to politics earlier this month when she said she will run as Popular Party candidate for Madrid´s mayor in municipal elections to be held in May.
Formerly the president of the Madrid region, she has remained one of the politicans with the highest public ratings.
Click to discover why Esperanza Aguirre is known as Spain´s Iron Lady.