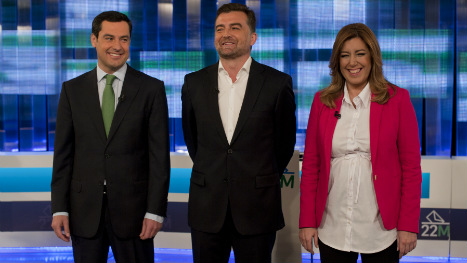 Candidates Juanma Moreno of PP, Antonio Maillo of IU, and current president Susana Diaz ahead of TV debate. Photo: Jorge Guerrero / AFP
Recent years of recession and corruption scandals make the southern region of farms and tourist beaches a prime testing ground for Spain's new political dynamic, transformed by the crisis and ensuing austerity measures.
The two parties that have taken turns to govern Spain since the 1980s face a rival pair of surging protest movements in a dress rehearsal for the national polls due around November.
It is an important warm-up for contenders such as left-wing anti-austerity party Podemos, which is looking to match the feat of its ally Syriza in Greece. Pablo Iglesias kisses Podemos' candidate  in Andalusia Teresa Rodriguez during a meeting, in Malaga on March 14th. Photo Jorge Guerrero / AFP
Syriza won Greek elections in January on a wave of discontent about economic cuts imposed during an economic crisis — the same trend that has pushed Podemos to the top of the polls in Spain.
Podemos was buoyed by Syriza's victory, but was given pause for thought by the tense squabbles Syriza is now locked in with European powers over Greece's debt.
In Andalusia, "everyone will interpret the results as if it were a first round in the general elections," said Anton Losada, a political scientist at Santiago de Compostela university.
"That is going to happen with the Andalusian election and will happen again with the other local and regional elections in May."
The main opposition Socialist Party, in power in Andalusia since 1982, is seeking re-election against the conservative Popular Party which currently governs Spain.
Polls indicate neither of the giants will win an absolute majority in the regional parliament from Andalusia's 6.5 million voters.
The winner may have to strike an alliance with Podemos or with another upstart contender, the centre-right Ciudadanos. Albert Rivera (L) with Ciudadanos candidate for the presidency of Andalusia Juan Marin during a rally in Malaga on March 8th. Photo: Jorge Guerrera / AFP
That could foreshadow what coalitions may later be forged to govern Spain, since polls indicate the national election may also fail to hand one party an absolute majority.
Andalusia was among the regions hardest hit by the collapse of Spain's housing market in 2008. Its regional unemployment rate is the highest in the country at 34.2 percent.
Socialist leaders there, along with certain labour union representatives, have been hit by a series of corruption scandals.
The Socialists have fallen out with their current coalition partners, the United Left, and look set to lose seats in Sunday's vote, according to polls.
The Popular Party is also losing support there, blamed by voters for hardship under the economic cuts its national government has imposed.
Enter Podemos and Ciudadanos, which rank third and fourth in polls of voting intentions in Andalusia with around 11 and 15 percent of the vote respectively.
Formed just in January 2014, Podemos has also topped recent national polls.
Its pony-tailed leader Pablo Iglesias, 36, vows to end austerity and do away with what he brands a corrupt political elite.
But his alleged links to Venezuelan leaders — regular bogeymen in the Spanish media — and his support for Syriza threaten to put off some voters.
Ready to scoop them up is Ciudadanos, which started as a Catalan anti-independence party and then expanded onto the national stage in recent months. It shares Podemos's stance against corruption but strikes a more moderate tone.
"In Ciudadanos, we want justice. What Podemos wants is revenge," said Ciudadanos' leader Albert Rivera, 35, in an interview in El Mundo newspaper this week.
"We could have a more diverse Andalusian parliament, with new political forces getting in, and their support could become necessary to govern," said Jaime Ferri Dura, a political scientist at Madrid's Complutense University.
Polls suggest the Socialists will gain the most votes and be the ones to choose a coalition partner, while renewing their hold on the regional administration — a prospect that exasperates the ruling conservatives.
"In Andalusia we have had so many problems that we cannot afford to be in the hands of the inexperienced," Ana Mestre, a regional Popular Party deputy for the coastal province of Cadiz, told AFP.
"One thing is very clear: voting for Ciudadanos, Podemos or United Left will be a vote for the Socialist Party."