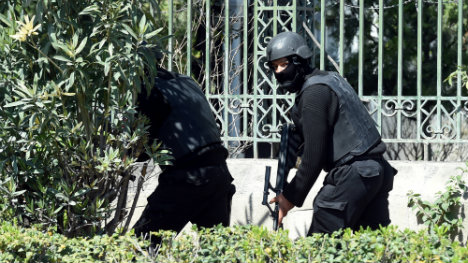 17.45: Spain condemned in the strongest terms the "heinous" attack on the Tunisian museum in which 17 tourists died.

The Foreign Ministry released a statement on Wednesday evening in which it confirmed that at least one Spaniard had been killed.

"Spain has learned with horror and indignation the news of the terrorist attack carried out today in Tunisia. The Spanish embassy in Tunis has been in permanent contact with the Tunisian authorities in the event that Spaniards had been affected and an emergency consular team was formed."

"Unfortunately, the Tunisian authroities have reported a short while ago that among the dead is one Spanish national but at the moment we have no more details."

The statement continued: "The attack has caused 19 deaths and a high number of injuries among the museum visitors"

Earlier in the afternoon it emerged that two gunmen were killed as security forces stormed the Bardo museum where dozens were being held hostage.

"The government of Spain condemns in the strongest terms this cowardly terrorist attack and reiterates its full solidarity with the Tunisian authorities in their fight against terrorism and hopes that the perpetrators of this heinous crime are brought to justice."

16: 09: The Tunisian prime minister, Habib Essid, said 19 people had been killed in the museum attack, including 17 tourists from Spain, Italy, Germany and Poland.

Another 22 tourists were injured and another two Tunisian men.
The Tunisian Interior ministry had said the hostage crisis ended with the death of two gunmen after security forces stormed the building.

At around 3.15pm the first reports started to come from Tunis indicating that the situation was over and that those held hostage within the Bardo Museum had been freed.

British, French and Italian nationals were also among those taken hostage, the radio station reported.

Cruise ship company Costa Crociere said one of its liners, with 3,161 registered passengers, was docked in Tunis at the time of the attack.

"On the occasion of today scheduled call some guests on cruise on board our Costa Fascinosa had a tour in the city. All the shore excursions organised by Costa during today stop in Tunis have been immediately recalled on board," the company said in a statement.

The Bardo museum is internationally-renowned for its collection of mosaics and is visited regularly by groups of tourists, many disembarking from Mediterranean cruises.Early reports suggested that at least seven foreign tourists and one Tunisian national have been killed in the attack, while hostages remain trapped inside the world famous museum, according to Tunisia's Interior Ministry.

A rescue operation is currently underway. Hostages have been shown running from the museum on Tunisian television, while security forces have surrounded the building.

PHOTO: A Photo taken by one of the hostages in the Bardo Museum. #Tunisia #Hostage #Developing pic.twitter.com/eq07QbNmsq

According to local media reports three men dressed in military-style clothing opened fire at around midday local time. There are unconfirmed reports that they may have taken hostages inside the museum, which stands adjacent to the country’s parliament.

The Bardo museum is visited by thousands of tourists each year as it contains one of the world’s largest collections of Roman mosaics.

The below map shows the location of the Barco Museum and its proximity to the country's parliament (Assemblee Nationale).