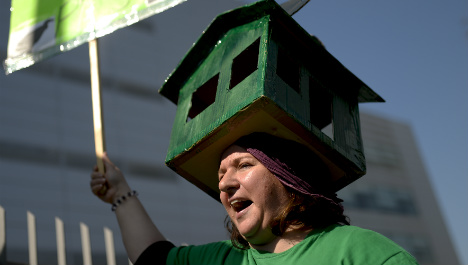 A woman from PAH protests at an eviction. Photo: Josep Lago / AFP

Jessica's apartment is quiet but for the ticking of the living room clock. It is 6:00 am and the police could arrive at any moment.Like thousands of families in Spain, she and her two children aged five and seven are about to be evicted and thrown out on to the wintery streets.

As in many such cases, a group of activists — Hugo, Merche and Rodrigo — are waiting, ready to resist.

"We should go and wake them up, so the police don't," says Hugo Atman, a documentary film-maker and activist.

An Ecuadorian with long black hair, Jessica came to Spain aged 20 in 1997 and was unemployed for three years until recently.

The few hours' cleaning work she has managed to get doesn't cover the rent and Spain's eviction laws have caught up with her.

Jessica Bernice Michelena (L), (40) cries as police evict her and her family from their squatted home on February 3, 2015, in Madrid. Photo: Pedro Armestre / AFP

"I cannot bear the trauma this causes for the children," says another anti-eviction activist, Isabel Novelle, 48, at the headquarters of a neighbourhood association.

"These people have no welfare support and no alternative," says Novelle.

Authorities seized 95 homes a day in 2014 from inhabitants who defaulted on their mortgage payments, according to official data.

On top of that were countless other families evicted for defaulting on rent or for occupying vacant properties.

Crowds of activists from the "Indignants" movement that sprang up during Spain's economic crisis have been rallying in defence of those facing eviction since 2011.

Operating in local groups scattered nationwide, they claim to have blocked hundreds of evictions.

"If we do not unite to change the situation, it will not change," says Angeles Gracia, another activist trying to prevent Jessica from being thrown out of her home.

Their campaign in 2013 pushed the government to pass a partial moratorium on evictions for vulnerable families.

But now another reform threatens to undermine the movement. A new security law will set fines of up to 30,000 euros ($31,000) for obstructing an eviction.

"They're going to fine me for that? For helping someone at one of the most critical moments in their life?" says Novelle.

Rights group Amnesty International has branded the law a breach of the right to demonstrate.

For the governing conservative Popular Party, the law was needed "because crimes and forms of delinquency are evolving", said Luis Aznar, one of the senators who last week shepherded the law through the upper house of parliament.

"Now for the first time the calculation of the fine will take into account the offender's economic resources," Aznar told AFP.

Police staff union SUP said a reform was needed to provide "better protection" for officers ordered to carry out evictions — but its spokesman Javier Estevez said the new bill was no good since it lacks popular and political support.

"We often do not agree with what we are doing," Estevez said. "You see police officers with tears in their eyes. But we cannot say no."

Pro-democracy movements under the Franco dictatorship were followed in later years by protests against slum clearances. The trend has since grown with activism by unionists and by young unemployed people, Perez said.

Jessica ended up waiting for two nights before the police came to her door. Twenty officers were met by activists packed inside and outside the flat.

"Wake up, neighbours! They're evicting people on your doorstep!" the protesters shouted, while Manolo Beltran, a big blond activist of 45, marshalled the human barrier outside.

A volunteer lawyer announced she would make a final appeal to the courts.

But Jessica was scared and did not want to hole herself up inside any longer. Sobbing, she handed over the keys.

A few weeks later, it was Angeles Gracia's turn. A bulldozer knocked down her home under a compulsory purchase order. Beltran tried to block it and got arrested.

"Ideology is all very well. But you also have to act," he said.