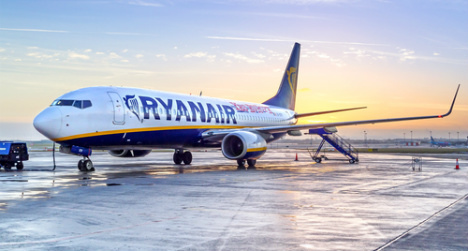 Photo of a Ryanair aeroplane: Shutterstock

The boy was being rushed for an emergency liver and kidney transplant in Madrid from his home in Gran Canaria on Saturday, March 14th after a donor had been found.

The budget airline refused to let the sick child fly because the family had not "acquired the tickets far enough in advance".

Aviación Digital, an airline industry news website, said that the child, who has not been identified, had to fly to Madrid on a later flight with Air Europa.

The parents of the child received a telephone call on Saturday from the transplant services of Hospital La Paz in the Spanish capital to tell them they had organs ready to transplant.

The family rushed to the airport and tried to buy tickets for the first flight to Madrid, Ryanair flight RYR2012.

However, a Ryanair official, after consulting with the company’s head office, informed the family that they could not board the flight.

A Ryanair spokeswoman told The Local, "We have looked into this matter with our handling agent at Las Palmas and unfortunately, we were unable to accommodate this family onto our flight as it was too close to the departure time. We will be happy to assist them with their flight requirements".

The family managed to find a different flight with the airline Air Europa that took off one and a half hours after the Ryanair flight. The flight arrived at Madrid Barajas airport, from where the child was rushed to Hospital La Paz.

The hospital’s transplant team spoke of the "hours of anguish" preceding the transplant, when they were not sure if their child would arrive in time to receive the organs.