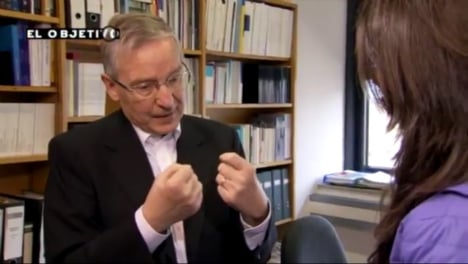 He described his concern at the rise of political parties such as Syriza in Greece and Podemos in Spain.

"Syriza at least has political experience, but Podemos does not," said Donges "In Germany we had someone telling us nice things and people said 'this Hitler, he will calm things down',"

He adds that "Pablo Iglesias, like Hitler, is capitalizing on social disillusionment and disappointment".

He added that of course the ideologies of the two "could never be compared".

Donges, who is professor emeritus of political economics at the University of Cologne, told presenter Ana Pastor that it was not just Podemos’ problem but the problem of Spain’s established political parties who have not "entered into a debate with Podemos".

The German economist’s remarks have caused a storm on social media, with "Podemos con Hitler" (Podemos with Hitler) trending on Twitter in Spain.

"To compare Podemos with Hitler is a provocation and shows the fear of those in power. To compare the PP (Popular Party) with Franco is logical and democratic," tweeted S4NCH4.

Podemos, which means We Can, has experienced a rapid rise since its formation, just over a year ago. In the latest polls the left-wing party has come top of voter intentions, marking the end of Spain's traditional two-party system.

But the party, which runs on a strict anti-corruption message, has recently been plagued by reports of one its leaders dodging taxes and questions over its financing and links to Venezuela.