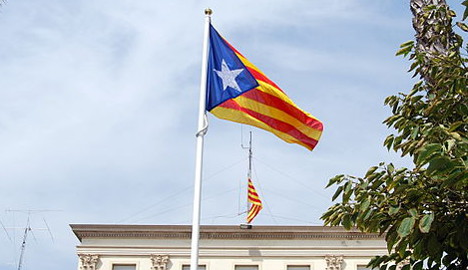 The events took place at a bar called 'Golden Gloves' in the early hours of Wednesday morning, according to the Spanish daily 20 minutos.

The officer, along with three other off-duty policemen, drunkenly started making fun of the flag and the independence movement, before taking the flag down and urinating on it.

Customers alerted the Catalan police force Mossos d'Esquadra, who then arrived on the scene.

The police officers were part of group of police sent to the Catalan coast by the interior ministry for increased security following months of riots in the area.

According to local newspaper El Punt Avui, the Catalan police did not want to comment because no official report was filed.

Still, both the mayor of the town and Catalonia's interior minister have spoken out against the officer's actions.

Mayor Montserrat Candini called the events "disgraceful, uncivil and disrespectful", though she acknowledged that the actions of one person did not reflect the attitudes of the whole force.

"I hope that (the police) have made the appropriate checks and take appropriate disciplinary action," Candini added.

"Every police officer has the ability to limit what they say," Espadaler said.