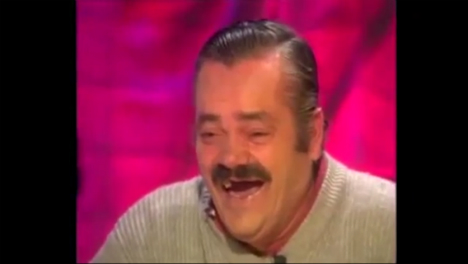 The video hit two million views within 48 hours of being published on YouTube. In it, subtitles taken from an Apple engineer's description of the new Macbook, unveiled at a San Francisco conference on Monday, are played over footage of a man giving an interview in Spanish.

The man laughs hysterically as he seemingly describes the moment Apple boss Tim Cook saw the product for the first time.

“$1,299! That’s all our customers need! An overpriced notebook!” read the fake subtitles, as the toothless engineer wheezes, breaking out into high pitched giggles.

“And it even comes in gold. Tim ate it up! We were all surprised he went with it.”

The man behind the infectious laugh is really Spanish comedian Juan Joya Borja, aka El Risitas (Giggles) who in his heyday, around 15 years ago, appeared on the television programmes of Spanish TV presenter Jesús Quintero and in films such as Torrente 3: The Protector, a parody of the US film, The Bodyguard.

The clip is taken from a 2007 appearance on Ratones coloraos, during which El Risitas tells the story of a job he once had in a paella restaurant in the southern city of Chipiona.

Now, the Seville native has gone viral, with newspapers around the world picking up the story.

“Could Laughing Man be the new Downfall?” mused The Guardian, referring to the famous clip from the film about Hitler’s final days, possibly the post parodied YouTube clip in history.

TechCrunch, a technology website, said that while the new Macbook had proved divisive, “there´s one thing we can all agree on: oh man this parody video is fantastic”.

While the laughing Spaniard might be garnering a lot of attention this week, it is far from the first time the El Risitas clip has been used in such a way, in fact, he is now a fully-fledged meme.

Bizarrely, it was the Muslim Brotherhood who was one of the first to harness the power of the El Risitas parody, using the video to criticize Egyptian president Abdel Fattah El-Sisi. The video, subtitled in Arabic, has had over 860,000 hits so far.

Since then the clip has been used to parody everything from the Ottawa bus system to DSLR cameras.

While El Risitas was well known in Spain before, this week the comedian – and his laugh – have gone global. So be prepared to see and hear a lot more of the man behind the meme.