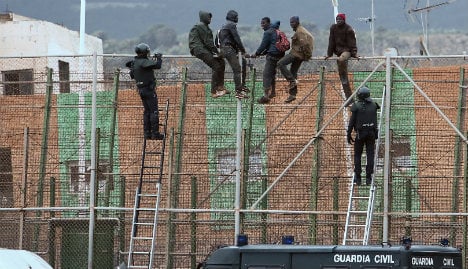 A photo of immigrants scaling the fence in Melilla taken in February by Angela Ríos, who has reportedly been arrested for smuggling immigrants into Melilla. Photo: Angela Ríos / AFP

A photographer who works for AFP was arrested on Wednesday and later released pending charges of transporting illegal immigrants in her car in Spain's north African territory Melilla, which she denied.

"I do not understand this persecution," Rios told AFP by telephone.

She was not on assignment when she was arrested, local Civil Guard spokesman, Juan Antonio Martin Rivera, told AFP.

Local police said a freelance journalist from Melilla had smuggled a number of immigrants across the border in her car.

She has been arrested for the crime of "aiding illegal immigration", according to the Civil Guard police in Melilla.

The Spanish photojournalist denies all charges, according to a tweet by Periodismo Humano (Human Journalism), a project set up to report stories from a human rights perspective by Pulitzer Prize-winner Javier Bauluz. Screen shot: the Twitter page of Angela Ríos, who has reportedly been arrested for smuggling immigrants into Melilla.

Rios' lawyer Antonio Zapata said Rios had told him she pointed some immigrants in the direction of the immigration centre when she saw them as she was driving.

She said she then got out of the car to take pictures of them running, and police detained her when she reached the centre, Zapata told AFP.

Officers ordered her to follow them in her car to the Civil Guard headquarters, where she was still in detention early on Wednesday afternoon, the lawyer said.

AFP's director for Spain, Patrick Rahir, was in contact with the Spanish government to demand an explanation for the arrest.

"We hope that this is just a misunderstanding and that our stringer can be released as soon as possible," he said.

One man was injured in the attempt, receiving medical assistance from the Spanish Red Cross.

Some remain perched on top of the wire fence, according to police sources quoted in Spanish media.