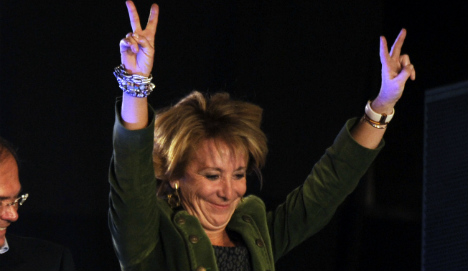 The 63-year-old will stand as the Popular Party’s mayoral candidate for Madrid in May’s municipal elections in what is widely viewed as an attempt by party leaders to galvanize its voters and slow the rapid slide down the opinion polls.

The move, announced Friday, marks a return to frontline politics for the woman who stepped down as regional President of Madrid in September 2012 after four successive victories, citing personal reasons.

But it has come as no surprise.

Dubbed "La Dama del Hierro" (The Iron Lady) in recognition of her similarities to Margaret Thatcher, Aguirre was never going to slip quietly away into retirement and she is already spicing things up.

Ten reasons why she is Spain's own version of Margaret Thatcher.

A battle broke out within hours of the announcement after it appeared she was to be ousted as regional chair of the PP against her will as a condition for running for mayor, that her policies and electoral list would be determined by central office.

In a tweet she threatened to back out of the mayoral candidacy if she couldn´t be her own woman.

"I am not going to be the candidate if someone with who I don´t agree is going to draw up the electoral programme. I am not a puppet," she wrote.

But by Monday the row looked like it had blown over, when she went on national television to declare that she was prepared to dedicate herself exclusively to City Hall, as party protocol dictated.

The calm didn´t last for long and in the same interview Aguirre seemingly launched an attack on present incumbent, Ana Botella, insisting that the "megalomaniac" administration would not be continued if she was to win.

Sending a swipe at Botella, who is from the same party and has announced her own bowing out of the political sphere, Aguirre said she would not dream of setting foot in Cibeles Palace, the new City Hall digs in the old Post Office building that cost an estimated €400 million of taxpayers money to refurbish.

"I´m not going to have a megalomaniac City Hall, a mayor must be close to the citizens," she said in an interview with Telecinco.

Fearsome as ever, Aguirre who is widely considered to have been the leading rival to Mariano Rajoy within the Popular Party, was pulled back into the fold at a turbulent time for the ruling party.

With polls showing that the PP is fast losing support with the encroachment of new parties Podemos and Ciudadanos threatening to devast them at the polls, Aguirre is seen as one of the few characters whose popularity hasn´t waivered.

In a metroscopia poll last month for El Pais, Aguirre secured 79 percent of the vote from PP supporters as their favourite candidate.

Even a controversy that kept her in the headlines last year has done little to dampen support. She received widespread criticism from opposition parties after an incident that saw her drive away from traffic police while being fined after illegally parking on Madrid´s Gran Via.

She knocked over a police scooter in her haste to get away and then blamed the police for being over zealous and persecuting her because of her celebrity. But the legal complaint against her was dropped by a judge in January due to lack of evidence.

Ten reasons why she is Spain's own version of Margaret Thatcher