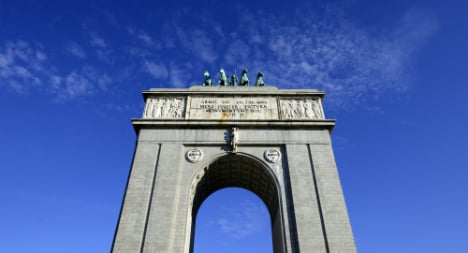 Arco de la Victoria, Madrid. Photo: Gerard Julien / AFP
"It would be inconceivable to see a statue of the Fuhrer in Germany or of Il Duce in Italy," said Eduardo Ranz, a 30-year-old lawyer who is leading efforts to have the Franco symbols removed.
"It would be like if in Germany a victim of Nazis saw a swastika in the streets. It's unthinkable."
But in the Spanish city of Melilla, bordering Morocco, a bronze statue of the dictator who ruled Spain with an iron fist from the end of the country's Civil War in 1939 and his death in November 1975 is still on display. A statue of Gen. Francisco Franco in the Spanish city of Melilla. Photo: Angela Rios / AFP
Ranz filed a lawsuit on February 11 to demand that 38 mayors from across the country remove the 86 symbols of the Franco dictatorship that are still on display their public spaces.
That date marks the anniversary of the proclamation of the First Spanish Republic in 1873.
The mayor of Madrid, Ana Botella, wife of former conservative prime minister Jose Maria Aznar, is among those targeted by the lawsuit.
Another lawsuit is to be filed on April 14, the anniversary of the proclamation of the Second Spanish Republic in 1931, targeting Franco symbols linked to religious schools and Spain's Catholic Church, which was close to the dictatorship.
"The goal is to restore dignity to the victims of the Franco regime, to stop us from being humiliated as a country, to improve our history as a nation and homeland, and respect the law," said Ranz.
He was referring to a 2007 law that mandates removal of all remaining Franco symbols from public buildings, with some exceptions allowed for works of particular religious or artistic significance.
There have been other lawsuits against Franco-era symbols but this is the first time that so many mayors have been targeted at once, said Ranz.
After Franco died in 1975, Spain's transition to democracy included an agreement among political parties to put the war and the Franco era behind them in the interest of unity and rebuilding.
Both sides in the conflict — Franco's Nationalists and the Republicans of the leftist government he ousted — committed atrocities but under a 1977 amnesty, no war crimes trials were held.
Addressing this dark chapter of Spanish history has been largely taboo.
"We have arrived at the paradoxical situation of seeing victims of the Franco era pay with their taxes for the upkeep of the dictator's tomb," said Emilio Silva, the founder and president of the Association for the Recovery of Historical Memory (ARMH), which represents victims of Franco.
"This does not happen in any other democratic country in the world," added Silva, whose grandfather was shot by Franco's forces in 1936 near Leon in northwestern Spain.
Silva was referring to the Valley of the Fallen, a huge mausoleum to the late dictator just outside of Madrid that was built largely by prisoners drawn from the forces Franco had defeated in the civil war.
The 50-metre (160-foot) high Victory Arch of Madrid, built in the 1950s to commemorate the victory of Franco's forces, is another disturbing leftover from the regime, said Silva.
"It is located 800 metres from the official residence of the prime minister and none of them in these 40 years has taken steps to remove it or change its meaning," he said.
"It is public recognition for people who participated in the assassination of 100,000 civilians," he added.
Just over 113,000 civilians disappeared during Spain's civil war and the early years of the Franco dictatorship that followed, according to Silva's association.
Of these only the remains of around 6,000 victims of Franco's forces have been found, mainly in mass graves, and given a proper burial, Silva said.
Other Franco-era symbols that remain in Madrid include a plaque in the Royal Palace of El Pardo where Franco lived and two stone shields in the Palace of the Holy Cross, home to Spain's foreign ministry.
The municipal governments of Madrid and Melilla did not reply to requests for comment on the lawsuit.
Melilla city hall has refused to remove the statue of Franco, arguing it honours the military and not the dictator.
"Spain is a unique case in the democratic world, not just because no one was put on trial over the dictatorship but also because numerous monuments are still present," said Silva.
Chon Vargas, whose union leader grandfather was executed by shooting following a summary trial in 1939, said the symbols were a "humiliation" for the families of Franco's victims.
Her mother Ascension Mendieta lives on a street named after five brothers who fought for Franco's forces during the civil war who had a reputation for being especially cruel.
"I want the name of this street to be changed. Jews received reparation. We also demand it," said Vargas.